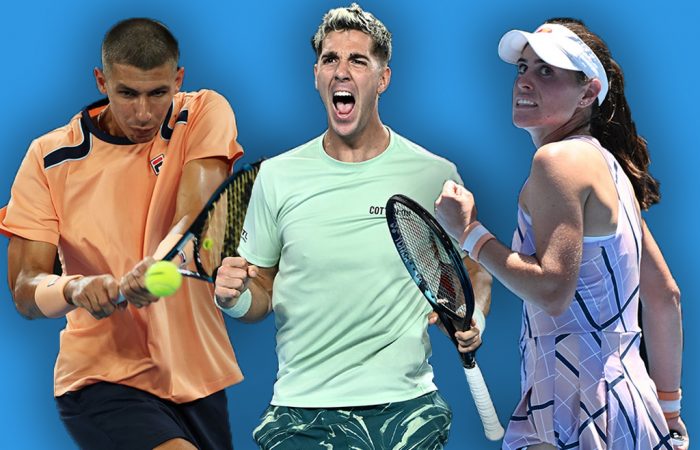 As Australian Open 2023 unfolds, Aussie players are inspiring with their determination and efforts.

“I’ve worked my absolute butt off just to get back on the court,” explained the 24-year-old Birrell, who nearly ended her career after two elbow surgeries.

“There was a few moments where I didn’t think it was going to happen.”

Thanasi Kokkinakis’ resilience to overcome multiple injury setbacks makes him a crowd favourite, while a resurgent Alexei Popyrin is winning hearts with his spirited efforts too.

Birrell, Kokkinakis and Popyrin are among 21 Aussie players scheduled to compete on day four at Australian Open 2023.

[WC] Kimberly Birrell (AUS) v Linda Fruhvirtova (CZE)
Women’s singles, second round, Kia Arena, third match
Birrell scored an emotional first-round win to advance to a Grand Slam second round for the first time in four years. The 24-year-old from the Gold Coast, a wildcard ranked No.167, is now aiming to match her career-best result from AO 2019, when she made the third round. Her opponent, 17-year-old Fruhvirtova, is making her Australian Open debut. The world No.82 is the youngest woman currently ranked inside the world’s top 100 and now hoping to make her own mark on the Grand Slam stage.
Head-to-head record: First meeting

[WC] Alexei Popyrin (AUS) v [8] Taylor Fritz (USA)
Men’s singles, second round, John Cain Arena, third match (not before 3pm AEDT)
World No.113 Popyrin has made a strong start to the 2023 season, winning five of his seven matches. The 23-year-old Aussie scored a five-set epic in the opening round, setting up a showdown with world No.9 Fritz. Popyrin scored his third career top-10 win at Adelaide earlier this month, which makes his 25-year-old American opponent wary. “He honestly plays kind of similar to myself,” Fritz noted. “Big serve. Looks to get around and attack with his forehand.”
Head-to-head record: Fritz leads 1-0
Last meeting: Fritz won 6-4 6-3 (Washington, August 2022)