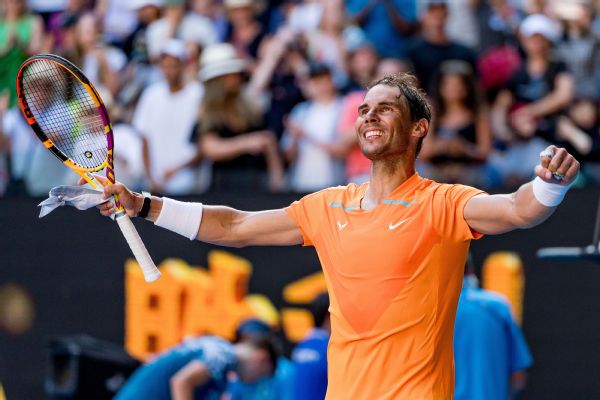 MELBOURNE, Australia — Rafael Nadal never truly seemed in danger of becoming the first Australian Open defending men’s champion to lose in the first round since his current coach, Carlos Moya, managed to beat Boris Becker a quarter of a century ago.

Still, this was not a vintage performance by Nadal, who came into Monday’s matchup against 21-year-old Jack Draper with an 0-2 record in 2023 and six losses in his past seven outings overall. After nearly two hours of so-so play, Nadal found himself even at a set apiece.

He appeared to be pulling away, taking advantage of his opponent’s bout with cramps on an afternoon with the temperature at about 85 degrees Fahrenheit, when suddenly Draper went up by a break in the fourth set. From there, though, Nadal would not drop another game, beginning his pursuit of a record-extending 23rd Grand Slam championship with a 7-5, 2-6, 6-4, 6-1 victory that took more than 3½ hours in Rod Laver Arena.

“I need a victory, so that’s the main thing,” Nadal said. “Doesn’t matter the way.”

That’s good, then, because the 36-year-old from Spain was not in peak form. All in all, it was a bit of a struggle. He tried to put a silver-lining spin on things, nonetheless, given his recent track record and knowing that he tore an abdominal muscle twice in the past six months.

“I was humble enough to accept that [there were] going to be a little bit of ups and downs during the match,” Nadal said. “[That’s a] typical thing when you are not in a winning mood.”

Both men are left-handers, but that is pretty much where the similarities end, whether in terms of style or age or experience or accomplishments.

Nadal, who is seeded No. 1 because top-ranked Carlos Alcaraz is sidelined with an injury, is appearing in his 67th Grand Slam tournament. Draper, ranked a career-best No. 38 this week, was making his fourth trip to a major, and his best showing was getting to the third round at the US Open last September.

Draper also has shown problems dealing with steamy conditions: In his ATP Tour debut at the Miami Open in March 2021, he collapsed on court and needed to stop playing after one set.

This time, signs of trouble showed up early, and Draper was treated by a trainer during changeovers. Later, he massaged his right thigh between points.

Nadal, not surprisingly, wore Draper down from the baseline, engaging in exchanges before finding an opening to yank a big forehand this way or that.

“Last year has been, without a doubt, one of the…