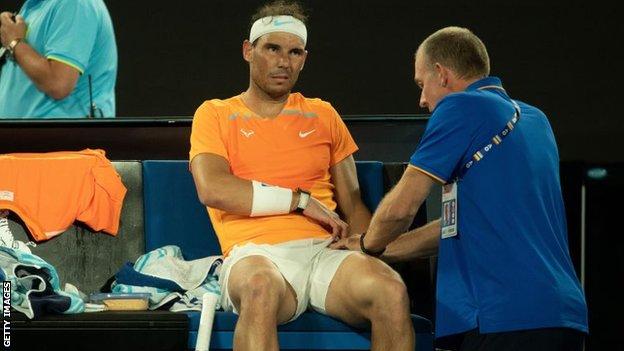 Spain’s Rafael Nadal is expected to be sidelined for six to eight weeks with a hip injury that hampered him during his exit from the Australian Open.

Nadal, 36, had an MRI scan on his left hip in Melbourne and it showed a tear in his left psoas muscle.

The world number two will return to Spain to begin physiotherapy treatment.

Top seed Nadal said he was “mentally destroyed” after his title defence in Melbourne came to an end.

“The scan showed a grade two injury in the psoas of the left leg,” Nadal tweeted on Thursday.

“Now it is time to have rest and anti-inflammatory physiotherapy.

“The normal recovery time is six to eight weeks.”

The timeframe means Nadal could be fit to play the first Masters tournament of the 2023 season at Indian Wells in March.

The European clay-court season starts the following month and culminates in early June at the French Open, where Nadal hopes to win a record-extending 15th title.