Raducanu on Coco Challenge in AO Round Two 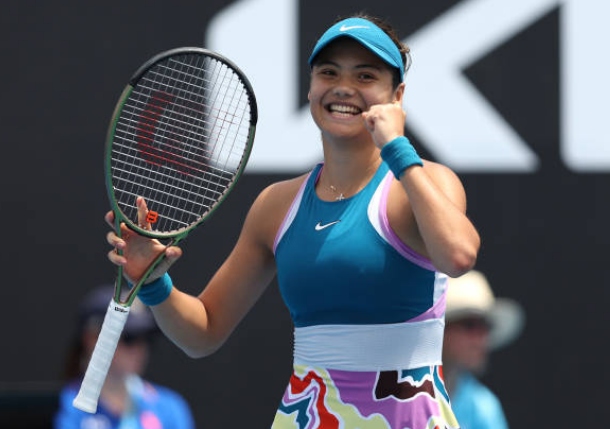 Major aspirations collide when Coco Gauff squares off against Emma Raducanu for the first time in an Australian Open second-round blockbuster.

Separated by 70 spots in the rankings, two of tennis’ most charismatic young champions aspire for what each other owns.

French Open finalist Gauff’s goal  is to capture a maiden major, while 2021 US Open champion Raducanu aims to return to the Top 10 where Gauff resides.

In her second Australian Open main draw, Raducanu nearly tripled Tamara Korpatsch in winners—27 to 10— scoring a 6-3, 6-2 sweep on 1573 Arena. It was Raducanu’s first Grand Slam win since she defeated Alison van Uytvanck in her Wimbledon opener last June.

The 77th-ranked Briton said she’s pumped to play the seventh-ranked Gauff for the first time.

“I think we’re both good, young players, we’re both coming through. Yeah, part of the next generation of tennis really. Yeah, it’s going to be a great match.”

The 18-year-old Gauff, who won the Auckland title earlier this month, raised her record to 6-0 on the season, including sweeping all 12 sets she’s played in 2023. Gauff sees the similarities and disparities between her and Raducanu.

“I talk to her pretty much at all the tournaments. I didn’t really know her that well in juniors, but I got to talk to her more on tour now,” Gauff told the media in Melbourne. “I mean, obviously she’s gone through a lot of pressure, bursting onto the scene. I feel like probably more than I have experienced coming to win a slam.

“And especially I feel like being from the UK, being like the first British person to do something in a long time, probably is a lot more pressure than what I’m used to being an American. You know, Serena is retired now, but she was always the American that people looked to. Yeah, I can’t really understand as much as I can, but I definitely can relate to bursting onto the scene and dealing with some pressure but I don’t think to that level.”