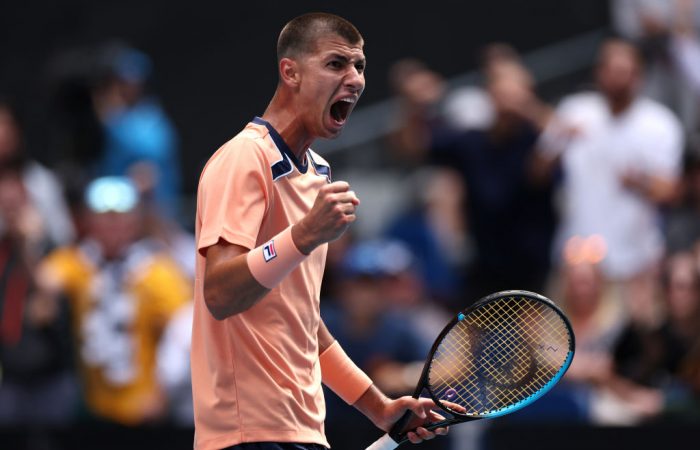 Aussie wildcard Alexei Popyrin has recorded a stunning top-10 win in the second round at Australian Open 2023.

Alexei Popyrin has produced one of the biggest wins of his career, as his resurgent form continued at Australian Open 2023.

It is Popyrin’s second win over a top-10 player this month, having earlier defeated world No.6 Felix Auger-Aliassime in Adelaide.

It was a first set dominated by good serving and big hitting, with both players combining to win 83 per cent of points on first serve whilst blasting 30 combined winners for the set.

Only one break point was created during that opening set, which Fritz closed out with a strong tiebreak performance.

In the second set, Popyrin was able to pry the door open for the first time, creating three break points in the sixth game of the set, but Fritz dug his way out of that hole to keep things on serve.

The second ended up in another tiebreak and this time Popyrin dominated, racing to a 5-0 lead before closing it out 7-2 with a mighty roar to the crowd.

Popyrin struck 19 winners in the second set, won 84 per cent of points on first serve and created the only break point chances in the set as his confidence began to grow.

The 23-year-old Australian kept ramping up the pressure early in the third set, eventually landing the first break of the match to take a 2-1 lead, before holding to love in the very next game.

Popyrin’s third set was a serving masterclass with the world No.113 remarkably winning all 20 points off his own serve. He struck 13 winners and made only three unforced errors as he played near flawless tennis against the American.

Popping OFF ⚡@AlexeiPopyrin99 has taken the third set and is ONE set away from the third round! 💪#GoAussies • #AO2023