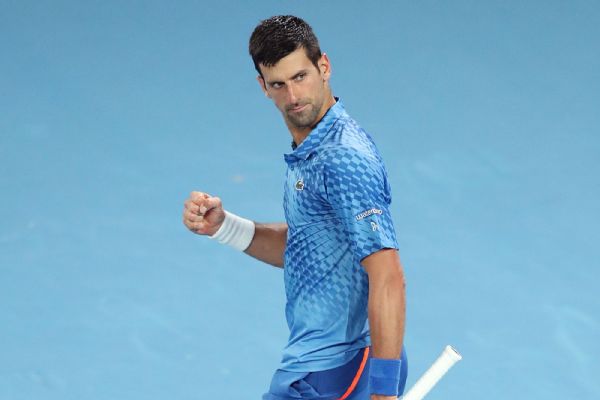 MELBOURNE, Australia — The supportive signs and dozens of Serbian flags and loud chants of Novak Djokovic‘s nickname filled Rod Laver Arena, providing a warm welcome marking his return to the Australian Open — a tournament he has dominated in the past but could not enter a year ago.

Djokovic acknowledged the greeting with a quick wave of his left hand when he stepped out onto the court at 10:30 p.m. Tuesday, then got down to business by playing quite well and only briefly showing a hint of trouble from the balky left hamstring that was heavily taped.

He began the first-round match with an ace at 125 mph and a love hold, took control of that set with a 12-point run and was on his way to a 6-3, 6-4, 6-0 victory over 75th-ranked Roberto Carballes Baena that finished after midnight.

“Unbelievable atmosphere. Thank you so much for staying this late, everybody. Also, thank you for giving me such a welcoming and a reception I can only dream of,” Djokovic told the crowd in an on-court interview. “I really feel very happy that I’m back in Australia and I’m back here on the court where I had the biggest success in my career.”

Djokovic’s participation is one of the chief storylines of the first Grand Slam tournament of 2023. That’s because Djokovic, 35, never got to play a point last season at Melbourne Park, the site of nine of his major championships, because his visa was blocked and he was deported from Australia after a legal saga tied to his lack of any vaccination against COVID-19.

He never did get the shots and also missed the US Open because of it. But Australia’s government has since relaxed coronavirus-related restrictions, allowing Djokovic to come to the country, and also waived a rule that could have stopped him from getting in for three years following a visa revocation. He has insisted that whole episode in January 2022 deeply affected him but that he does not hold a grudge; there certainly did not seem to be any hard feelings toward him Tuesday.

This was not necessarily Djokovic at his absolute best, and he appeared to show some frustration early on when he kept glaring and muttering in the direction of coach Goran Ivanisevic and the rest of his entourage in the stands. But Djokovic produced strong enough tennis to take the initial step toward what he hopes will be a 22nd Grand Slam title to tie rival Rafael Nadal‘s record for the most in tennis history by a man.

Djokovic, who has spent more weeks at No. 1 in the ATP rankings…