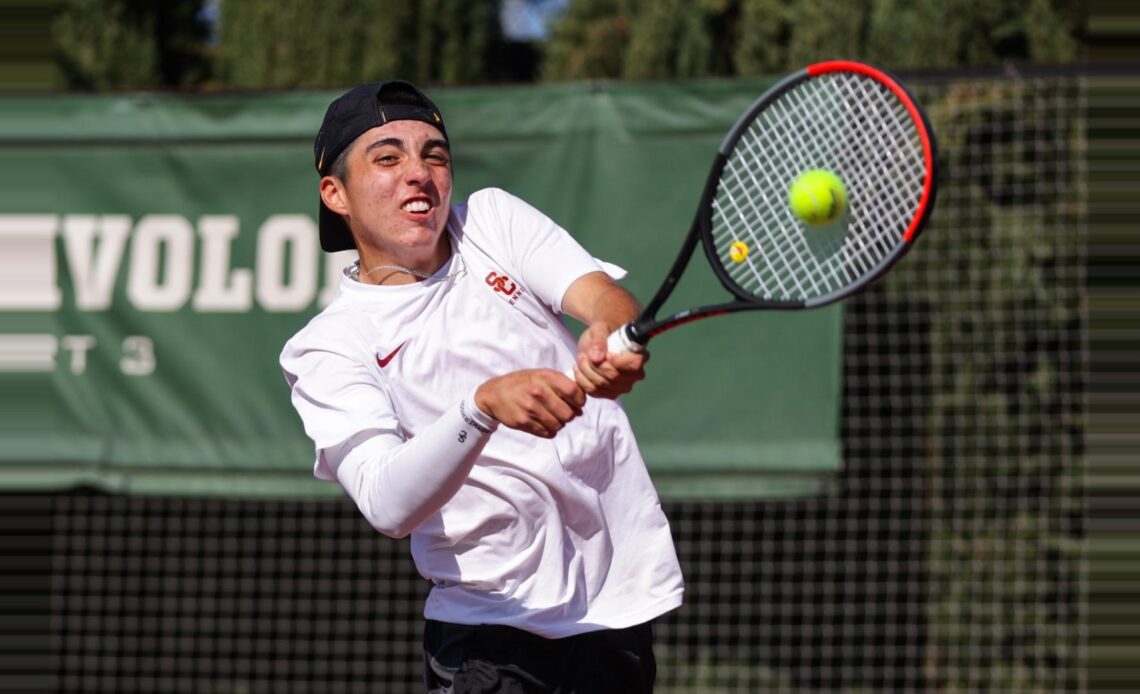 
The No. 8 USC men’s tennis team kicks off the 2023 dual match season with a double header against Sacramento State and UC Irvine on Sunday, Jan. 21 at Marks Stadium. Matches are scheduled for 10 a.m. (Sacramento State) and 2 p.m. (UC Irvine).

RANKINGS
Troy enters the spring season as the No. 8 ranked team in the country (ITA Coaches Poll, Jan. 18). USC boasts three Trojans in the national singles rankings with sophomore Peter Makk leading USC at No. 38 after a strong fall showing. Trojan 5th year Bradley Frye locked in the No. 65 ranking, while senior Stefan Dostanic secured the No. 79 rank.

USC also boasts a ranked doubles pair of Stefan Dostanic and Bradley Frye, who hold the No. 12 rank.

LAST SEASON
During 2022, Troy accumulated a 23-6 record, captured it’s second consecutive Pac-12 Tournament Championship and reached the NCAA Round of 16. USC wrapped up 2022 as the No. 13 ranked team in the country while Bradley Frye and Stefan Dostanic earned All-America honors. The 2022 season also saw Masi named Pac-12 Coach of the Year, while Trojans also swept the Pac-12 Player and Doubles Team of the Year awards.

WATCH THE TROJANS
All matches at Marks Stadium can be viewed through PlaySight. Please visit USCTrojans.com/mtennis to watch live streams of the matches as well as view live scoring. Follow @USCmenstennis on Instagram and Twitter for score updates.

SCOUTING SACRAMENTO STATE
Sacramento State (unranked), 1-1, opened their dual season with a 4-2 win over UC Riverside (Jan. 19). On Friday, they fell 4-3 to UC San Diego on the road. The Hornets were selected to finish second in Big Sky Preseason Coaches Poll and carry a roster that features 11 players, including eight returners. Among those returners are a pair of first team all-Big Sky selections in juniors Mark Keki and Mate Voros. In fact, the Hornets return everybody from last year’s singles lineup, and every player from the team’s doubles lineup as well. Sacramento State does not have any ranked singles

SCOUTING UC IRVINE
UC Irvine (unranked), opens 2023 action with the dual match at USC. They do not currently have any ranked singles or doubles players.