No. 6 Duke Closes Weekend with 4-0 Win Over Charlotte 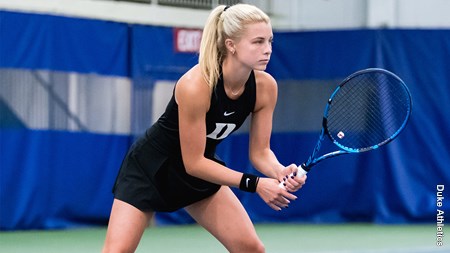 
DURHAM – The sixth-ranked Duke women’s tennis team collected their second win of the day and third of the weekend on Sunday as the Blue Devils registered a 4-0 victory over Charlotte at Sheffield Indoor Tennis Center in Durham, N.C.

The Blue Devils improved to 3-0 to start the season, while Charlotte dropped to 1-1.  Duke registered its 14th straight home victory dating back to last year.

•    Court No. 2 set the tone early for the Blue Devils as Ellie Coleman and Karolina Berankova didn’t lose a point downing Charlotte’s 57th-ranked Ruxi Schech and Kaavya Sawhney, 6-0, in only 23 minutes.

•    On court three, Duke’s tandem of Emma Jackson and Iuliia Bryzgalova won the first four points and went on to clinch the doubles point for the Blue Devils with a 6-1 victory over Lucie Petruzelova and Emma Wilkins.

•    Charlotte was leading, 5-2 on court one when the doubles point was clinched with 21st-ranked Margaux and Lucia Quiterio ahead of Duke’s 13th-ranked tandem of Chloe Beck and Cameron Morra.

•    The Blue Devils continued their hot start into singles by winning the first set on all six courts.

•    The doubles duo of Ellie Coleman and Karolina Berankova notched their first win over a ranked team as they downed No. 57 Schech/Sawhney in doubles. Duke’s tandem improved to 7-1 on the season.

•    The Blue Devils moved to 2-0 all-time against Charlotte in the series history.

•    Duke won its 12th-consecutive contest against a Conference USA opponent and is now 14-2 all-time versus the C-USA.

•    Coleman was the only Duke student-athlete to notch a singles win in all three matches over the weekend.  She is now 8-3 on the year.