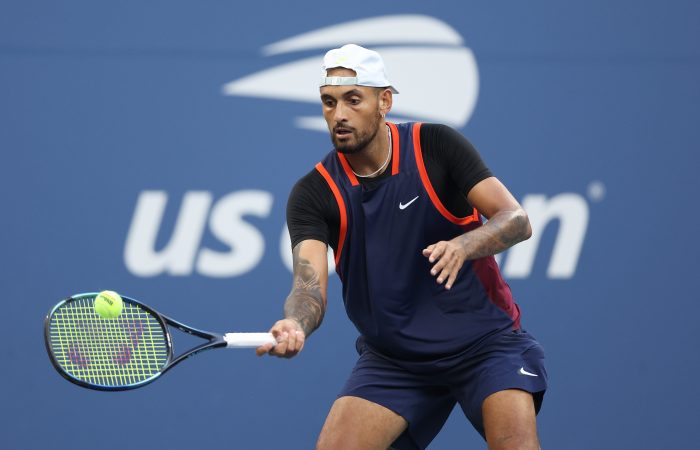 World No.25 Nick Kyrgios enters the third round at this year’s US Open determined to continue his impressive form in a career-best season.

As Nick Kyrgios targets new heights at this year’s US Open, the Australian is surprising even himself with the newfound determination and self-belief fuelling his campaign.

“Every day I come in, I watch what I eat, I try and get sleep. Like every practice session I try and have good intent,” Kyrgios said after surviving a second-round test against Frenchman Benjamin Bonzi.

“I almost don’t know who I am anymore, to be honest, because that’s not me.”

Kyrgios has advanced to the third round in the men’s singles competition at Flushing Meadows for the fifth time in his career and is now targeting a first fourth-round appearance.

He’ll play 23-year-old American wildcard J.J. Wolf for a place in the round of 16 today.

“He has a big serve, tries to take it to the opposition. Serves big and plays big,” noted Kyrgios of the world No.87.

“I’m expecting an incredibly hard match. I know it’s not going to be easy at all.”

Kyrgios is in the midst of an incredible season, one that’s reaffirmed his status as one of the most exciting players in the sport.

“This year’s been amazing in so many different ways,” said Kyrgios. “For my tennis, I kind of wanted to almost reinvent myself, get back to the top of the game where I know I belong.”

Kyrgios’ ranking had dipped to No.137 in February, his lowest mark in more than seven years. Yet he has since skyrocketed to world No.25. Had Wimbledon ranking points been awarded, Kyrgios would have been verging on his career-high of No.13, achieved in 2016.

The 27-year-old Australian currently sits at a career-high world No.18 in doubles, with a title-winning run at Australian Open 2022 alongside close friend Thanasi Kokkinakis a major highlight.

Kyrgios believes his recent Wimbledon performance, where he advanced to a first major singles final, has reinvigorated his outlook.

“The Wimbledon final was a turning point, I think, for me mentally,” Kyrgios admitted. “If I won that match, I don’t know where my motivation would have been at. Losing it and being so close, it was really tough for me to kind of swallow that.”

A self-described “perfectionist” on court,…