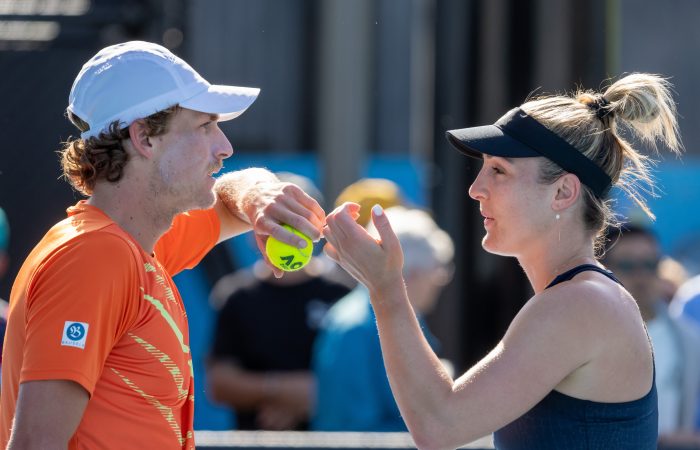 Max Purcell was one of seven Australian players to record first-round victories today in the Australian Open 2023 mixed doubles competition.

From elation to heartbreak, Aussie players experienced a full spectrum of emotions today in the Australian Open 2023 mixed doubles competition.

Maddison Inglis and Jason Kubler were thrilled – and relieved – after saving two match points in their first-round victory.

The Aussie wildcards scored a hard-fought 7-6(8) 1-6 [11-9] victory against world No.32 Alicja Rosolska and world No.6 Jean-Julien Rojer. Inglis and Kubler recovered from a 7-9 deficit in the deciding match tiebreak.

“I thought we were in a little bit of trouble there, but anything can happen in a match tiebreak, so you’ve just got to hang in there and try for literally every point,” beamed 25-year-old Inglis after claiming her career-first Grand Slam mixed doubles win.

“It was really exciting. I’m so happy we get to play again.”

Lizette Cabrera is also celebrating a major milestone. The 24-year-old teamed with fellow Townsville talent John-Patrick Smith to notch her first win in a Grand Slam mixed doubles draw too.

There was heart-break though for reigning US Open champions Storm Hunter and John Peers, who lost in the opening round.

Hunter and Peers had three match points during a tense second-set tiebreak, but were unable to convert. Two-time Wimbledon champions Desirae Krawczyk and Neal Skupski took advantage and eventually closed out a 6-7(3) 7-6(12) [10-8] victory.

Eighth-seeded Max Purcell and his Canadian partner Gabriela Dabrowski had no worries, posting a comfortable 6-2 7-5 win against world No.10 Yang Zhaoxuan and world No.36 Jan Zielinski.