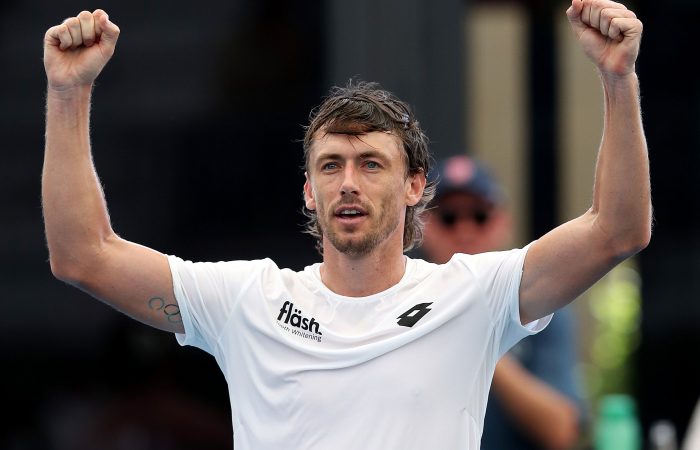 Australian qualifier John Millman saves match points against the higher-ranked Albert Ramos-Vinolas to progress to the second round of the Adelaide International.

John Millman has triumphed in a battle of the veterans at Adelaide International 2, with the 33-year-old Australian utilising all his experience as he outlasted Spaniard Albert Ramos-Vinolas in three tight sets.

Millman was chasing a first ATP main-draw victory since August 2022 in the South Australian capital and after two hours and 36-minutes, the tenacious Queenslander emerged with a 4-6 6-3 7-6(6) win.

Saving two match points in the third-set tiebreak, Millman’s victory over the 34-year-old Ramos-Vinolas set a second-round meeting with another Spaniard, Alejandro Davidovich-Fokina.

“I’m feeling fantastic … it’s always good when you win it 7-6 in the third,” said a delighted Millman, who having fallen to world No.148 in recent months, can sense a resurgence as a qualifier in the ATP 250 event.

“Now I’m here playing some pretty good tennis. Moving well and not in much pain.”

The Australian has showed as much in wins this week over Bernabe Zapata Miralles and countryman Chris O’Connell, which set up the main-draw match with Ramos-Vinolas on Adelaide’s Centre Court.

A determined Millman worked hard for opportunities against Ramos-Vinolas, recovering from a first-set deficit to level after the second set and force a third-set decider.

After the pair exchanged early service breaks, Millman made critical inroads against his 38th-ranked opponent, claiming another service break to take a 4-3 lead in that final set.

But consolidating again proved difficult, Ramos-Vinolas fighting back immediately before the match progressed so a tiebreak. Some stunning winners from each player were negated by untimely errors, with Millman saving two match points before holding one of his own.

The Australian managed it superbly as he increased his aggression to force the Spaniard into another critical error. “Even at age 33, I’m still trying…