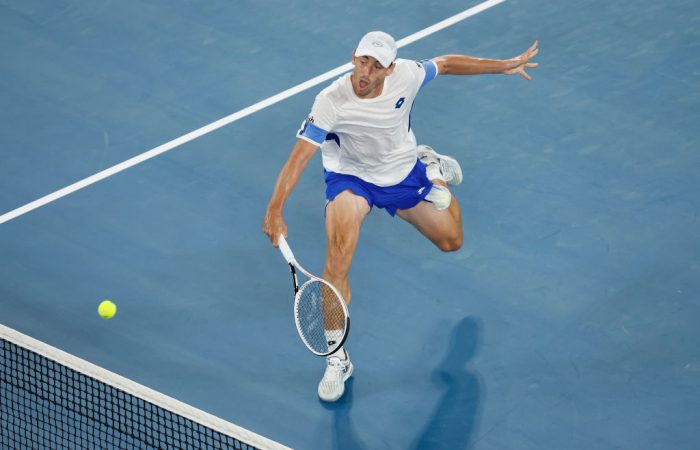 John Millman’s ninth Australian Open campaign has come to an end at the hands of world No.8 Daniil Medvedev.

The US Open 2021 champion took control after a tight first set to record a 7-5 6-2 6-2 victory in just on two and a half hours at Margaret Court Arena this evening.

The 33-year-old Millman produced a stirring win over Switzerland’s Marc-Andrea Huesler in the opening round and kept that momentum going early tonight, before Medvedev found his best form.

The first set saw seven breaks of serve in total, with seventh seed Medvedev serving for the set twice.

Millman narrowly missed a brilliant forehand that would have forced a tiebreak, handing Medvedev the opening set.

Long exchanges from the baseline were a feature, with 43 points won by the receiver and only 40 on serve between both players throughout the first set.

The second set saw the two-time Australian Open finalist click into top gear, landing 81 per cent of his first serves, sending down five aces to zero and striking 11 winners to four, to take the set in 38 minutes.

It was a classy and ominous performance from the former world No.1, who paid tribute to world No.140 Millman’s fight, particularly early in the contest.

“I think it was a great match, even the score in the second and third set doesn’t reflect the contest,” Medvedev said on court.

“He broke my serve three times in the first set, so well done to John. We had some 35-40 shot rallies and physically for both of us it was tough. I was wondering how I’d handle those points for a while.”

Medvedev has now won 14 of his last 16 matches at Melbourne Park, reaching the last two finals in the process.

His quest for a maiden Australian Open title continues in the third round, where he’ll meet either 29th-seeded American Sebastian Korda or Japanese qualifier Yosuke Watanuki.

Thanasi Kokkinakis has been the sole Australian winner so far on a rain-interrupted day three, with the 26-year-old scoring a comprehensive first-round win over former world No.9 Fabio Fognini.