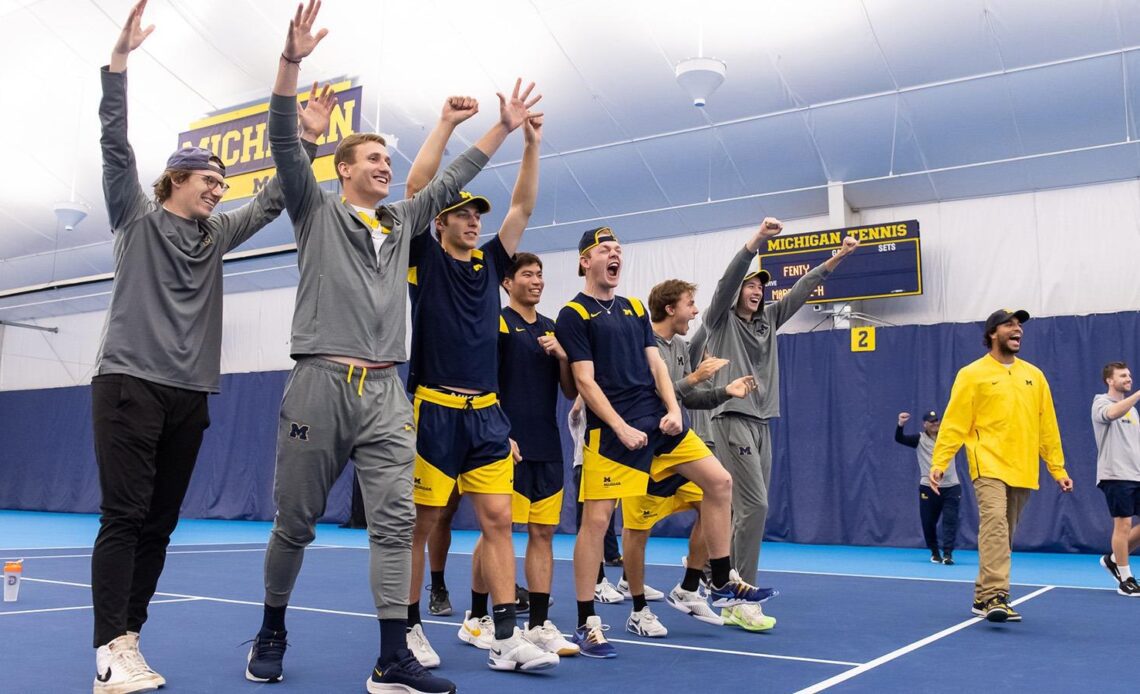 ANN ARBOR, Mich. — The No. 5-ranked University of Michigan men’s tennis team improved to 4-0 and completed a perfect weekend with a 7-0 sweep of Cleveland State on Sunday (Jan. 22). The win came in the nightcap of a doubleheader after the Wolverines defeated Brown 4-0 earlier in the day.

Patorn Hanchaikul and Will Cooksey dominated at No. 3 doubles, winning 6-0 to improve to 4-1 on the season. Patrick Maloney and Gavin Young followed with a 6-4 win at No. 1 doubles. They found themselves trailing 3-2 before winning three straight to regain the lead at 5-3 and splitting the last two games. Jacob Bickersteth and Bjorn Swenson left a 4-4 match at No. 2 unfinished to begin singles play.

Hanchaikul’s success continued in singles as he took a 6-3 first set at No. 5 over Devin Boyer and went on a 6-0 run in the second set. No. 6 ranked Andrew Fenty captured his 19th win of the season with 6-1, 6-2 wins over Maxime Mareschal-Hay at No. 2 singles. Maloney followed up to clinch the team win, with 6-0, 6-1 scores at No. 1 singles over Kade Mindry.

Cooksey kept things rolling, giving up just three games to win 6-2, 6-1 at No. 4. In his first match at No. 3 singles, Swenson picked up a victory as the No. 58 ranked singles player took down Raul Teichmann.

Mert Oral closed out the day in impressive fashion to leave the Wolverines unblemished on the day. He split the first two sets with JuandeDios Abboud which set up a 10-point tiebreaker. The players traded points with neither leading by more than two as Abboud led 9-7, one point away from winning. With his teammates cheering him on, Oral broke Abboud with four straight points to take the match 11-9.

Michigan (4-0) will host the ITA Kick-Off next weekend at the Varsity Tennis Center. The Wolverines are set to face Cal Poly at 10 a.m. on Saturday (Jan. 28), with Northwestern and Arkansas doing battle at 2 p.m. The losing teams will play Sunday (Jan. 29) at 10 a.m., while the winners…