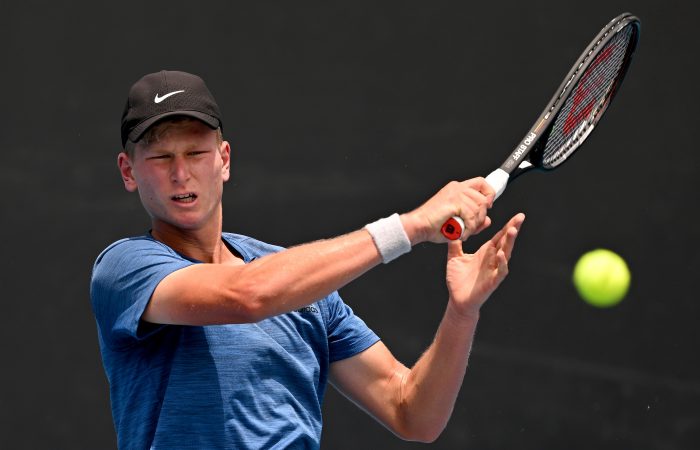 Pavle Marinkov has sat in the crowd at the Australian Open over the past three years, dreaming of emulating those battling on court.

Today the 16-year-old got his chance, making his debut in the boys’ singles competition. It proved a memorable one too, beating Austrian Joel Schwaerzier 6-4 7-5 in 90 minutes.

“I’m always here in January. The last three years I’ve been a spectator and can’t believe I now get the chance to play,” Marinkov said after the match.

The New South Wales teen was initially awe struck at the opportunity, but settled in quickly to find his groove.

“I started a bit slowly because I’d never played in front of a crowd like that before. It took some getting used to,” Marinkov said.

“To walk on court was not confronting, but certainly it was like ‘Wow, this is pretty big’.”

Marinkov earned his Australian Open wildcard after claiming the 18/u Australian Championships at the December Showdown.

“I was here last month for the December Showdown and that gave me a lot of confidence,” Marinkov said. “It also gave me a chance to get used to the courts and the way they play which helps.”

Marinkov’s family was in Melbourne during December and they made the trip down again to celebrate this moment with him.

“I played Traralgon (J300 ITF event) last week, so Dad came down with me for all of it. And my sisters have been here as well,” he said. “It’s great to have that support and to have your family around you for a moment like this.”

Marinkov will now play Switzerland’s Patrick Schoen in the second round.