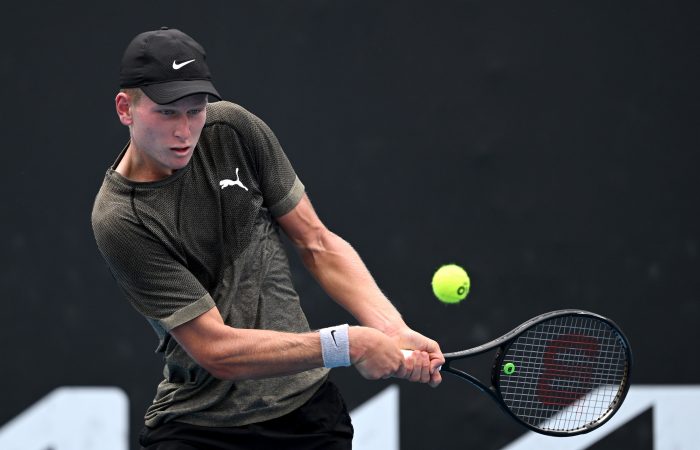 Aussie wildcard Pavle Marinkov has progressed to the third round in the Australian Open 2023 boys’ singles competition.

Pavle Marinkov’s outstanding run of form has continued with another commanding victory at Australian Open 2023.

The 16-year-old from New South Wales is through to the third round in the boys’ singles competition and is dreaming of lifting the trophy this weekend.

“It’s crossed my mind, I must admit,” Marinkov said with a smile.

“But I fully understand there is a long way to go and I have to keep focusing. There are so many good players here and I have a lot of work to do.”

The Aussie wildcard has now won 24 of his past 26 matches after a tremendous end to 2022.

Marinkov made four straight junior finals to finish the year, winning titles in Adelaide and Thailand before claiming the 18/u Australian Championships during the December Showdown at Melbourne Park last month.

He admits the depth of talent around the world has been the biggest thing he’s learned over that run.

“The amount of good players there are around the world is amazing. So much talent from so many places, and it shows how hard you have to work,” he said.

Marinkov had to withstand a momentum swing, as well as a rain delay, on his way to a 6-3 1-6 6-3 victory over Switzerland’s Patrick Schoen in second-round action today.

“I started very well but he really lifted and was playing amazing tennis,” Marinkov said.

“The rain delay was probably very good for me. It gave me a couple of hours to get my body and my mind completely right.”

After having his first taste of Grand Slam tennis, Marinkov is keen for more in 2023.

“My aim would be to play all the junior Grand Slams,” he said. “I’d love to pick up some more ATP points along the way as well this year.”

It ended an encouraging week for the 16-year-old, who had taken out the tournament’s top seed in the opening round.

The bold run of Aussie wildcard Lily Fairclough, a 17-year-old from Western Australia, also came to an end in the second round.

It was a tough day for Aussie contenders in the wheelchair competitions too. Both Heath Davidson and Ben Weekes bowed out in the opening round in their respective categories.