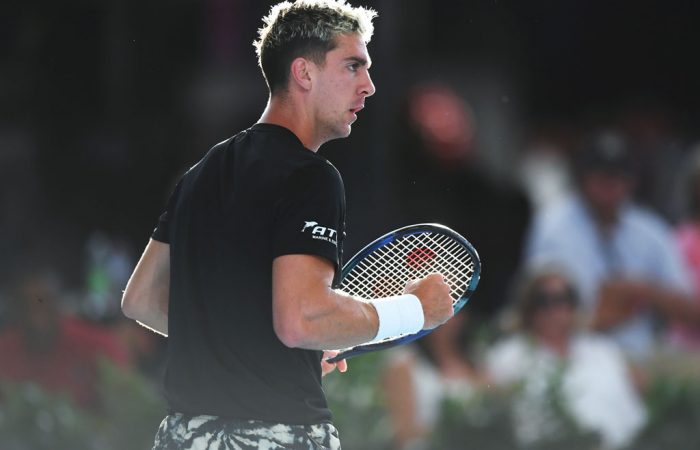 Thanasi Kokkinakis’ dream run at the Adelaide International continues, with the South Australian defeating Miomir Kecmanovic to reach the semifinals.

Thanasi Kokkinakis’s love affair with his home state continued as he powered his way into the semifinals of the Adelaide International.

It was a display of sustained ball-striking from the Australian, who reeled off 57 winners to 20 on the way to grinding his opponent down.

The dream is ALIVE 😍

The sixth game of the final set extended 14 minutes as Kokkinakis eventually converted a sixth break point to send the locals into raptures.

“I was a bit flat after the second set, but the crowd really gave me some legs. I found energy like I always do here,” Kokkinakis said after the match.

“I was holding my serve well all night quite easily, but I couldn’t squeeze a break in the second. I got going and played with a lot of freedom in the third.”

Entering the tournament with a mountain of points to defend after last year’s heroics, Kokkinakis is well on the way as he gears up for a clash with Spain’s Roberto Bautista Agut, in what will be the first career meeting between the pair.

“He’s a hell of a player but I’ll just keep trying to do what I’m doing,” Kokkinakis added.