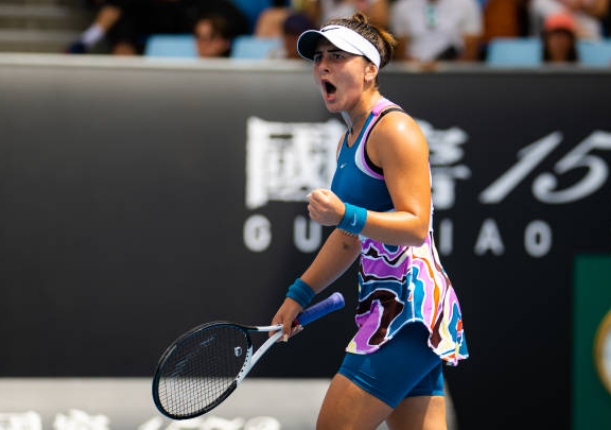 These days, Andreescu is tapping into memory motivation.

More: Kyrgios Out of Australian Open

Andreescu remembers the level of dynamic tennis she delivered capturing the 2019 US Open.

The former world No. 4 is convinced she can regain that lofty level—or more.

It was Andreescu’s first Australian Open win since 2021 as she missed Melbourne Park last year during her mental health hiatus.

The biggest difference in her state of mind? Andreescu feels life has gone from hectic to harmonious.

“I guess in my head it was very hectic, and some things around me as well have been kind of on edge, but now I finally feel like everything is harmonized,” Andreescu told the media in Melbourne. “I guess that’s a good word to put.”

The clever Canadian knows how to make things crazy for opponents.

Applying all-court acumen, Andreescu won 15 of 18 net points and dropped just seven points on second serve in a confident performance against the Wimbledon quarterfinalist. Andreescu will be a firm favorite in her second-round match against 102nd-ranked Spanish grinder Cristina Bucsa.

If the former world No. 4 wins, she could play the top-seeded Swiatek in round three. In their lone meeting, Swiatek stopped Andreescu 7-6(2), 6-0 in the Rome quarterfinals last May.

The reigning Roland Garros and US Open champion has inspired Andreescu for her quality and consistency.

“I’ve worked really, really hard, and I know what I’m capable of,” Andreescu told the media in Melbourne. “So looking at Iga, someone like her, it’s very motivating and inspiring because, I mean, it’s something hard to do in tennis to be consistent like that. So I definitely condone her.

“It definitely motivates me, and like I said, I know I can be back in that position like I was in 2019 and hopefully even better.”

A reunion with coach Christophe Lambert seems to have recharged Andreescu, who finished 2022 ranked No. 45 after compiling a 20-13 record. The Mississauga, Ontario native parted ways with Sven Groeneveld at the end of the season after spending over a year with him.

Previously she had been coached by Sylvain Bruneau of Tennis Canada. Lambert worked with Andreescu during her…