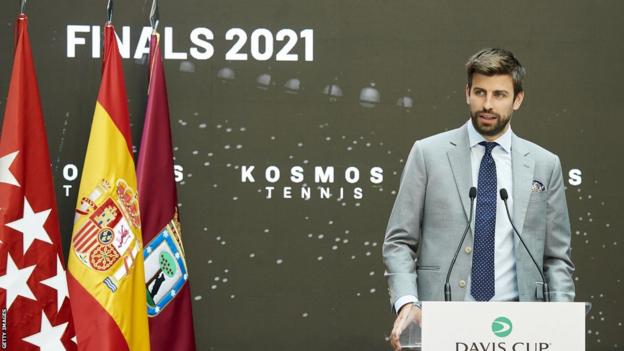 The International Tennis Federation is to end its deal with ex-footballer Gerard Pique’s company to organise the Davis Cup after less than five years.

They included changing the format of the 123-year-old tournament to an end-of-season ‘World Cup-style’ event, which was controversial among players.

The ITF says it has “ensured financial contingencies are in place”.

The deal was also due to provide an extra $25m a year for tennis development globally.

Britain’s Dan Evans said the end of the lucrative deal would be a blow – particularly for the players.

“It is disappointing that they can’t keep filling our pockets, but it was a matter of time, wasn’t it?” said the world number 27.

“We were getting paid a little too much for not a lot, I guess. But you get it whilst you can.”

The changes have had mixed results, with some low attendances and some big-name players remaining absent.

Kosmos – founded by former Spain, Barcelona and Manchester United footballer Pique – were known to have lost tens of millions of dollars on the 2019 event.

Spain were the first winners of the Finals event when it was held in Madrid in 2019, ending the tradition of home and away ties.

After the 2020 edition was postponed because of the coronavirus pandemic, it returned in 2021 in three cities – Madrid, Turin and Innsbruck – across 11 days.

Further changes were made in 2022 when teams played in a group stage in September, with the top eight qualifying for the Finals.

The Finals were set to be held in Abu Dhabi, a move which would have recouped significant funds for Kosmos, but it was instead held in Malaga.

Evans, 32, said he would prefer a return to the old format but added the views of the younger players were more important.

“I’ve heard people say they want to win the Davis Cup and they wanted it to be the old format with home and away ties – and that’s a top player I heard say that,” he said.

“We changed it when I don’t think it necessarily needed the whole format changing.