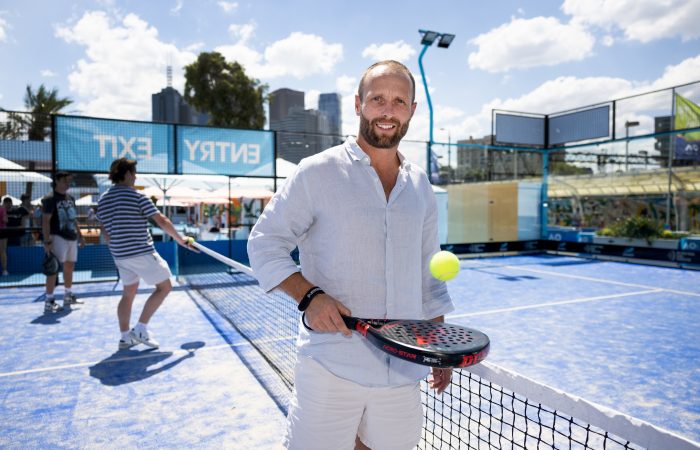 The Australian Padel Open, which begins today in Melbourne, is the largest professional Padel event ever played in Australia.

The inaugural Australian Padel Open kicks off at Game4Padel Docklands today, with local and international players competing to advance for a chance to play at Melbourne Park on the purpose-built Padel court from Friday.

The largest professional Padel event and first of its kind in Australia, the event features 132 players representing 20 nationalities in competition for international ranking points and a share of the $20,000 prize pool.

“There’s a lot of excitement amongst the playing group – especially the opportunity to compete at Melbourne Park on the purpose-built Padel court at the AO Tennis Club,” Tournament Director and Tennis Australia Head of Game Development Callum Beale said.

“In addition to international ranking points and prize money, players are eager for the opportunity to compete at Melbourne Park and to showcase the sport to fans on site and to those tuning in across the globe.”

With the sport already enjoyed by more than 20 million players* across 90 countries worldwide, the inaugural event comes as the viability and expansion of Padel in Australia enters exciting new territory.

Whilst the sport’s introduction to Australia remains relatively new, there’s already significant uptake in its popularity.

“If we look to countries like Spain where the sport has been popular for a very long time and where Padel courts are as common as tennis courts then we’re able to draw great confidence for the future landscape and projected uptake of it here,” Tennis Australia’s Chief Tennis Officer Tom Larner said.

“Currently, there are 23 courts and six Padel venues across the country, with two venues in Sydney and Perth and one in Melbourne and on the Gold Coast.

“With this comes great opportunity for clubs and private operators to service the growing demand for Padel and the team at Tennis Australia is excited by what’s in store for the future.

“With an estimated 5000 regular players and a strong indication for continued growth, the current positive momentum of the sport means there is increased demand for venues and professional playing opportunities within Australia.