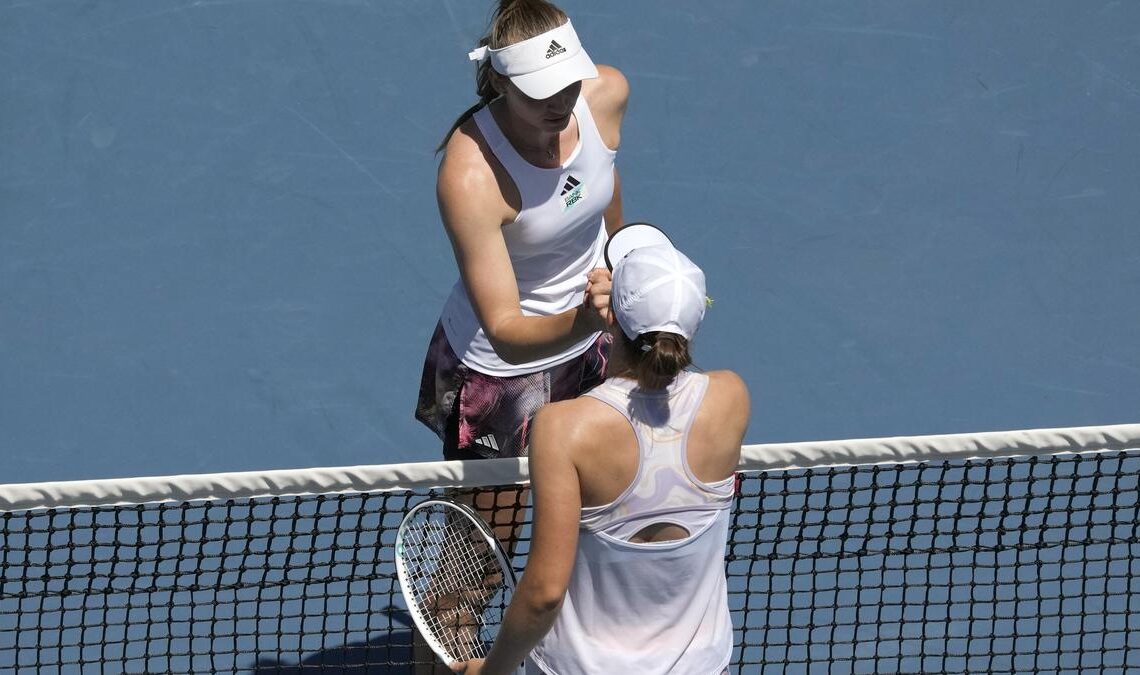 It all came so seemingly easy for Iga Swiatek last season — two Grand Slam trophies, eight titles overall, a 37-match winning streak, a lengthy stay at No. 1 in the rankings.

Those accomplishments made everyone else expect constant greatness from Swiatek, which she can’t do anything about. They also changed the way she approached big moments, and a 6-4, 6-4 loss to Wimbledon champion Elena Rybakina in the Australian Open’s fourth round Sunday made Swiatek wonder whether she needs to reassess her outlook.

“I felt like I took a step back in terms of how I approach these tournaments, and I maybe wanted it a little bit too hard. So I’m going to try to chill out a little bit more,” Swiatek said. “I felt the pressure, and I felt that ‘I don’t want to lose’ instead of ‘I want to win.’”

So there will not be a showdown between Swiatek and No. 7 seed Coco Gauff in the quarterfinals at Melbourne Park. Instead, it will be Rybakina taking on 2017 French Open champion Jelena Ostapenko, a 7-5, 6-3 winner against Gauff, with a semifinal berth at stake.

“I kept her under so much pressure,” Ostapenko said.

Add Swiatek’s loss to Week 1 exits by Ons Jabeur, Rafael Nadal and Casper Ruud, and this Australian Open marks the first Grand Slam tournament in the Open era — which began in 1968 — with the top two women’s seeds and top two men’s seeds all gone before the quarterfinals.

In other women’s action Sunday, No. 3 Jessica Pegula got to the quarterfinals in Australia for the third year in a row by defeating 2021 French Open champion Barbora Krejcikova 7-5, 6-2. Pegula now plays 2012-13 Australian Open champion Victoria Azarenka, who returned to the final eight at Melbourne Park for the first time since 2016 by grabbing the last three games of a 4-6, 6-1, 6-4 victory over 87th-ranked Zhu Lin that ended at nearly 2:20 a.m. on Monday.

Both the 22nd-seeded Rybakina, a 23-year-old who represents Kazakhstan, and the 17th-seeded Ostapenko, a 25-year-old from Latvia, made it this far in Melbourne for the first time.

“There was moments in the match where I was getting frustrated, because I normally can problem-solve, but today I feel like I didn’t have much answers to what she was doing,” said Gauff, an 18-year-old from Florida who was the runner-up to Swiatek at the French Open last June.