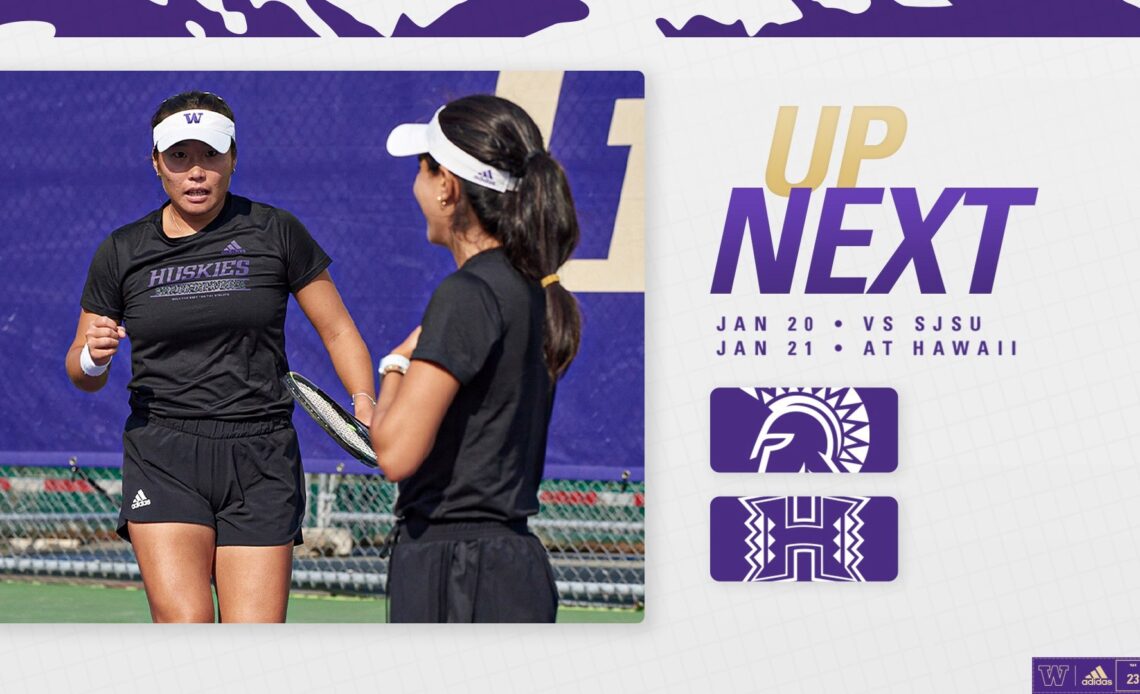 THIS WEEK IN HUSKY WOMEN’S TENNIS

SEATTLE — A much-anticipated 2023 season is set for first swings this Friday for the Huskies in Hawaii. Following up on a 2022 season that had the highs of ITA National Team Indoor and NCAA Championship qualification, but was handcuffed by injuries, coach Robin Stephenson and the full-strength Huskies are looking at not just returning to those team championship events, but making some runs.

It all begins Friday at 1 p.m. Pacific for the Dawgs in Honolulu, where they will open up against the San Jose State Spartans. One day later, Washington plays the host Hawaii Rainbow Wahine to conclude the opening week of dual play.

In just a few short weeks, the Huskies will be competing in a second-straight ITA National Team Indoor Championships, hosting this time around after they played their way in last year by upsetting UCLA. The Dawgs want to start the year strong to build up some momentum going into the Feb. 10-13 showcase.

Coach Stephenson’s ninth Husky team has a number of new faces on it, yet is also a largely experienced squad. Two of the four newcomers are veteran transfers in former Columbia teammates Jennifer Kerr and Melissa Sakar, who have a combined 75 dual match singles wins between them.

Freshman Erika Matsuda and the newest Dawg, winter quarter enrollee freshman Zehra Suko, will provide a youthful spark, but the other seven Huskies are all juniors or seniors.

But as is often the case, even experienced players will be presented with new challenges. The Huskies will have a new number one atop the lineup for the first time since 2019, as Vanessa Wong graduated in 2022 as the winningest Husky in history with 112 singles wins. UW also graduated four-year starter Nika Zupancic and consistent contributor Zoey Weil as well. Wong and Zupancic moving out of the top half of the lineup will mean Dawgs stepping up.

Luckily there’s a great mix to choose from. Junior Sarah-Maude Fortin had been on a roll last spring, going 14-3 at No. 2 singles to earn All-Pac-12 honorable mention, before she missed the final six matches with a foot injury. Fortin was ranked as high as 88th last year and started this fall at No. 92.

Fifth-year senior Hikaru Sato grew her game in her first year as a Dawg, starting every match last year and going 14-7 in…