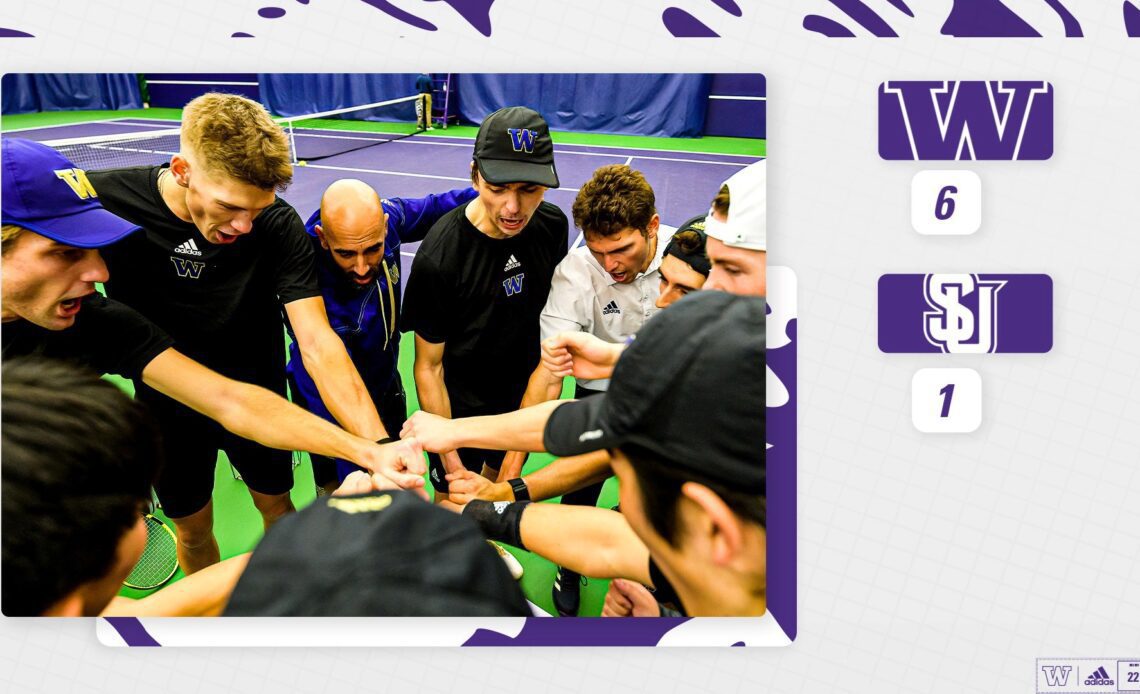 SEATTLE – First-year Husky Head Coach Rahim Esmail got the first win of his tenure today as Washington’s men’s tennis team opened its season with a 6-1 victory over Seattle U. at the Nordstrom Tennis Center.

The young Husky squad got its first test of the season from the Redhawks, fighting through some early match jitters that saw Seattle steal the doubles point in a deciding tiebreak. But Washington then settled down and won all six singles matches to give Esmail his first win at UW. Esmail had 110 victories under his watch as head coach at Samford before joining the Huskies as Associate Head Coach last year. After Matt Anger announced the end of his 28-year run at the helm of the program, Esmail was chosen as his successor.

“This is a big match for Seattle. We’re in the same town and probably one of the tougher teams on their schedule, so they get up for this match, and that’s great,” said Esmail. “That’s why we want to play these matches. It was a tough match. Our guys were super excited to get the season going, maybe too excited, that they needed to get some jitters out in doubles.

“But I thought it was a good start and good to be tested in that way, as Seattle U. played some good doubles. We need to do some things a lot better and we’ll get back to the drawing board at that. And Seattle U. didn’t go away in singles either, they made us earn it. For such a young team that hasn’t really been in a position where anything has been given to them, I explained to our guys that nothing out here is going to be given. If you want a game, a set, a victory, you have to earn it, and that’s the mentality we’re going to have. I’m glad we were pushed in certain areas because that continues to push us to be better.”

Junior transfer Jim Hendrikx made his Husky debut and was victorious in both singles and doubles. Sophomore Dzianis Zharyn also got his first dual match start in singles, all the way up at No. 2, and had the one of the more stress-free single wins. Freshman Brett Pearson also made his dual debut in doubles, coming up just short of a win with Nedim Suko.

Han-Chih Lin took on No. 1 singles duties for the first time today. He lost the first set, but then had a 6-1 second set win and was up 3-2 in the third when his opponent, Clement Hamel, retired with an injury.