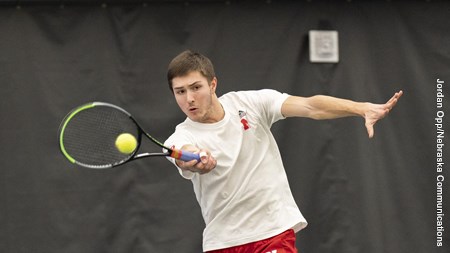 
Fort Myers, Fla. – The Nebraska men’s tennis team wrapped up its fall season at the Bonita Bay Classic held in Florida over the weekend. The Huskers left the Sunshine State with 10 wins as team over the three-day tournament, accumulating seven singles victories along with a trio of doubles wins.

Rudi Christiansen was the only unbeaten Husker this weekend, posting a perfect 3-0 record in singles action after winning all six sets. He took down Florida Gulf Coast’s Eric Oncins, 6-4, 6-3, on Friday before following that up with a win against Memphis’ Sam Edgar in consecutive sets, 6-2, 6-0, the following day. The Heilbronn, Germany native ended the tournament with a victory over Virginia Tech’s Matt Harper, 7-5, 6-3, on Sunday. In the fall, the junior holds a 5-3 singles record over his four tournament appearances.

Lars Johann, William Gleason and Shunya Maruyama each picked up a win on Friday night against Florida Gulf Coast, propelling the Huskers to four singles wins against the Eagles. Johann’s win was his sixth of the fall season, second-most for Nebraska, after knocking off Marcelo Sepulveda in straight sets, 6-3, 6-3.

Nic Wiedenhorn captured his first win of the tournament on Sunday morning, defeating the Hokies’ Jordan Chrysostom, 6-1, 7-6 (4). In Calvin Mueller’s only match, he fell to Magnus Johnson, 7-6 (4), 6-1, the No. 123 ranked player in singles competition.

In doubles action, Gleason and Wiedenhorn grabbed the lone win for the Huskers on Friday, outlasting FGCU’s Johnson and Sepulveda, 6-3. They followed that up with another win on Saturday against Memphis’ team of Connor Gannon and David Stevenson, 6-4. It was the duo’s first matches together this fall, just a year after teaming together five times. Maruyama and Johann got their only win of the tournament on Sunday, routing Virginia Tech’s Ryan Fishback and Frank Thompson, 6-2.

Stay up to date with the action by following the Nebraska men’s tennis Twitter and Instagram accounts, @huskermtennis.