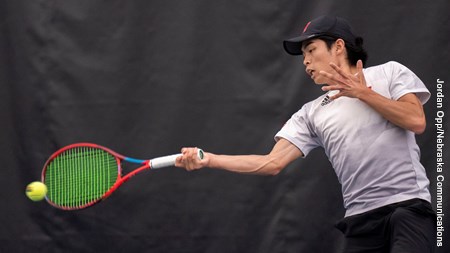 
Fort Meyers, Fla. – The Nebraska men’s tennis team travels to the bay area this weekend for the FGCU Bonita Bay Classic, Nov. 11-13. Matches will be played at the Bonita Bay Club in Fort Meyers, Fla., and will feature four Divison I teams competing in a head-to-head style format.

Nebraska begins play on Friday at 3:00 p.m. (CT) as it takes on Flordia Gulf Coast, the host school for the tournament. The Huskers then meet Memphis on Saturday morning at 11:30 a.m. (CT), and end the competition with a match against Virginia Tech on Sunday at 9:00 a.m. (CT).

Seven Huskers will travel to the final tournament of the fall season, with Ilarion Danilchenko being the only one staying behind.

Roni Hietaranta is coming off a fabulous performance at the Big Ten Individual Championships, winning three-straight singles matches to earn a spot in the semifinals. The Lappeenranta, Finland native now boasts seven singles wins in the fall, the most of any Husker thus far. He has been victorious in seven of his first 10 matches this year and looks to finish the fall campaign strong this weekend.

Lars Johann had a strong outing at the Big Ten Individual Championships, rattling off three-straight singles victories in consolation play last weekend. In his first year of game action, the Saarbruecken, Germany native holds seven total wins, which ranks second most for the Big Red.

After not competing last weekend, Calvin Mueller returns to action fresh off a Round of 8 appearance at the ITA Regionals. Mueller held a five-match winning streak earlier this season, the longest of any Husker. Nic Wiedenhorn will also travel this weekend, boasting a 2-2 fall singles record with a win in each of his first two tournaments.

Rudi Christiansen, William Gleason and Shunya Maruyama round out the field for NU, combining for eight wins this season. Each took home a victory last weekend and will look to finish the 2022 fall campaign with some momentum for the spring.

Stay up to date with the action by following the Nebraska men’s tennis Twitter and Instagram accounts, @huskermtennis.