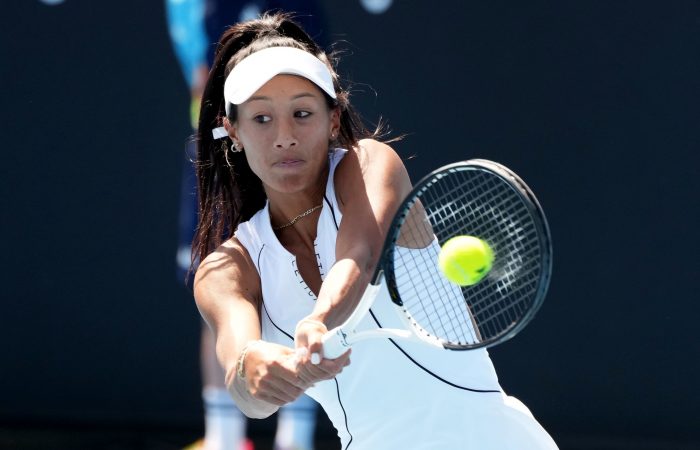 Priscilla Hon has booked her place in the second round of the Australian Open 2023 women’s qualifying singles competition.

Priscilla Hon is walking a different path in 2023, but she’s hoping the journey will be even more special as she searches for back-to-back Australian Open main-draw appearances.

World No.169 Hon had to fight hard to get past defiant American Katrina Scott 6-3 6-7(2) 6-1 in the opening round of qualifying today.

“The second set was frustrating. I felt I was in control of the match but would make a couple of errors at bad times and open the door,” Hon said.

“I felt like I got rid of that and concentrated hard during the third.”

“This year is a bit more low key and I’ve made a plan to just enjoy it.”

Hon has battled the hard road at times, with a lengthy injury lay-off throughout 2020 and 2021, but she isn’t daring herself to look too far ahead.

“In the past I’ve thought ahead a bit and it doesn’t really work for me. So it’s on to round two and that’s it,” she said.

The world No.362-ranked wildcard struck 11 winners to two in the opening set and returned 89 per cent of balls as she assumed complete control.

Hule hit back midway through the second set, but Perez steadied again to win the last four games of the match.

“It was good when I got that challenge in the second set that I was able to work out a few things. She is a very capable player, so it was nice to respond in that way,” Perez said after the match.

The 27-year-old was delighted with her performance given her lack of matches in recent weeks.

“Very happy with the performance. I didn’t know what to expect as I hadn’t had any singles matches leading into this event,” she said.

“I got a lot of confidence out of the practice sets I’d been playing, I was feeling good on court, very bouncy and good…