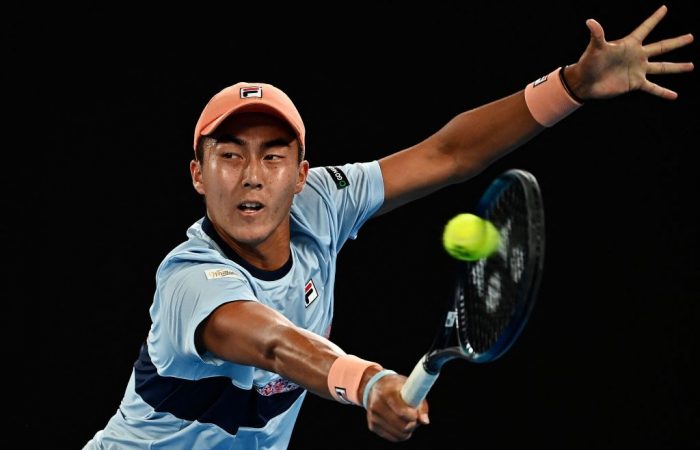 World No.4 Stefanos Tsitsipas powered to a straight-sets win over Aussie wildcard Rinky Hijikata at Melbourne Park this evening.

Rinky Hijikata’s bold Australian Open campaign has ended at the hands of world No.4 Stefanos Tsitsipas.

The Roland Garros 2021 finalist continued to build towards his best form with a 6-3 6-0 6-2 victory in one hour and 28 minutes at Rod Laver Arena this evening.

It was a spirited start by the 21-year-old Australian who came out full of energy, going toe-to-toe with the three-time Australian Open semifinalist in the opening four games.

Tsitsipas eventually landed a break of serve in the fifth game, establishing momentum and closing out the opening set 6-3 in 35 minutes.

The second set saw the 24-year-old third seed find top gear, losing only nine points for the set and striking 10 winners to three on the way to a 25-minute 6-0 result.

The 21-year-old Australian lifted to start the third, creating break point chances in the fourth game as he looked to swing the momentum. Tsitsipas served his way out of trouble before landing a break in the next game to put him on the path to victory.

Tsitsipas now holds a 17-5 win-loss record at the Australian Open, which is his best winning percentage at any major.

“It kind of feels like home whenever I’m back here. I’m seriously considering moving here one day,” Tsitsipas said on court about his love affair with Melbourne.

He also paid tribute to Australian tennis great and former Wimbledon and US Open finalist Mark Philippoussis who has been assisting his team.

“He’s a really modest and humble guy. I’ve got to know him a lot better recently, he brings a lot to the game and my team. He’s been helping me a lot with my serve and volley,” Tsitsipas added.

“He has contributed a lot to my offensive game, which I’ve been trying to implement a lot more recently.”

Tsitsipas will now take on the winner of the all-Dutch affair between Tallon Griekspoor and Botic van de Zandschulp in the third round.

Thanasi Kokkinakis was the sole Australian winner on a rain-interrupted day three, with the 26-year-old scoring a comprehensive first-round victory over former world No.9 Fabio Fognini.