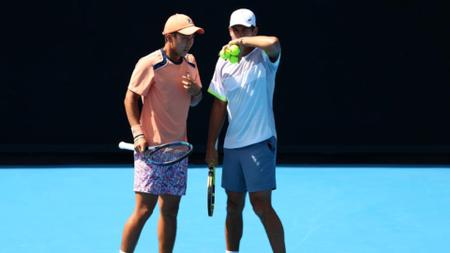 
Former University of North Carolina men’s tennis star Rinky Hijikata continues to make a big splash as a rising professional star, this time in doubles at the Australian Open.

The former Tar Heel, who played in Chapel Hill for head coach Sam Paul in 2020 and 2021, is a native of Australia. He teamed with countryman Jason Kubler as a wildcard entry, and the duo has won four consecutive matches. They upset the top-seeded doubles team of Wesley Koolhof and Neal Skupski in the quarterfinals on Wednesday in Melbourne by a score of 6-3, 6-1.

Speaking to the media after the victory, Hijikata laughed, “We are still just winging it,” reflecting the joy of continuing an unexpected run in a Grand Slam.

Hijikata and Kubler will face eighth-seeded Marcel Granollers and Horacio Zeballos in the semifinals on Thursday with a spot in Saturday’s men’s doubles final on the line.

The wildcard, homegrown duo of @rinky_23 and @JasonMKubler have toppled the No.1 pairing of Koolhof/Skupski 6-3 6-1.