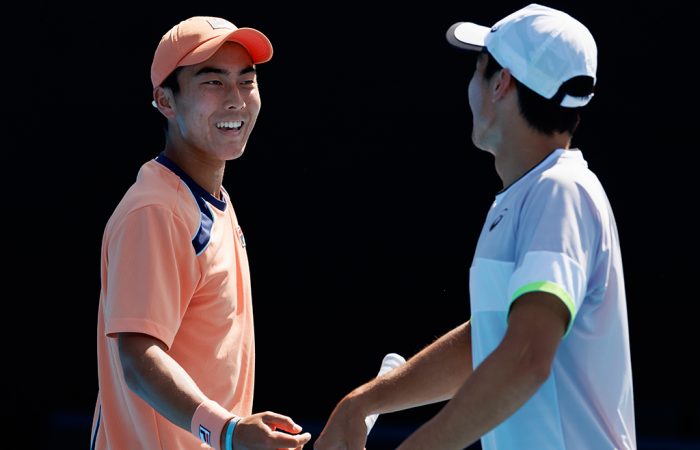 The Aussie wildcards, who had never played together before this tournament, have made a giant-killing run through the men’s doubles draw. They have eliminated five top-20 players, two seeded teams and even saved a match point to progress today’s semifinals.

These efforts are inspiring fans of all ages, which fills 29-year-old Kubler and 21-year-old Hijikata with immense pride.

“That’s unbelievable to hear. Obviously we’re trying to do the best we can,” said Kubler, a former world No.1-ranked junior who has overcome numerous injury setbacks throughout his career.

“If we can inspire anyone to play this great sport of tennis, that’s wonderful. We’re trying our best and hopefully you guys are enjoying it all.”

Kubler, currently ranked No.163 in doubles, is competing in a Grand Slam doubles draw for only the third time in his career. While for world No.277 Hijikata, this is his second major appearance and just his third tour-level doubles tournament.

It is a stark contrast to their opponents today, the experienced world No.16 Marcel Granollers and world No.14 Horacio Zeballos.

Granollers, a 36-year-old Spaniard with a career-high ranking of No.4, and Zeballos, a 37-year-old Argentine and former world No.3, have won seven ATP titles as a combination. They claimed their first together in 2019 and are aiming to reach their third Grand Slam final as a team.

“We play two guys who are well established in the doubles world and they’ve both had great singles careers as well,” Kubler acknowledged.

Hijikata and Kubler are among seven Aussie players scheduled to compete on day 11 at Melbourne Park.