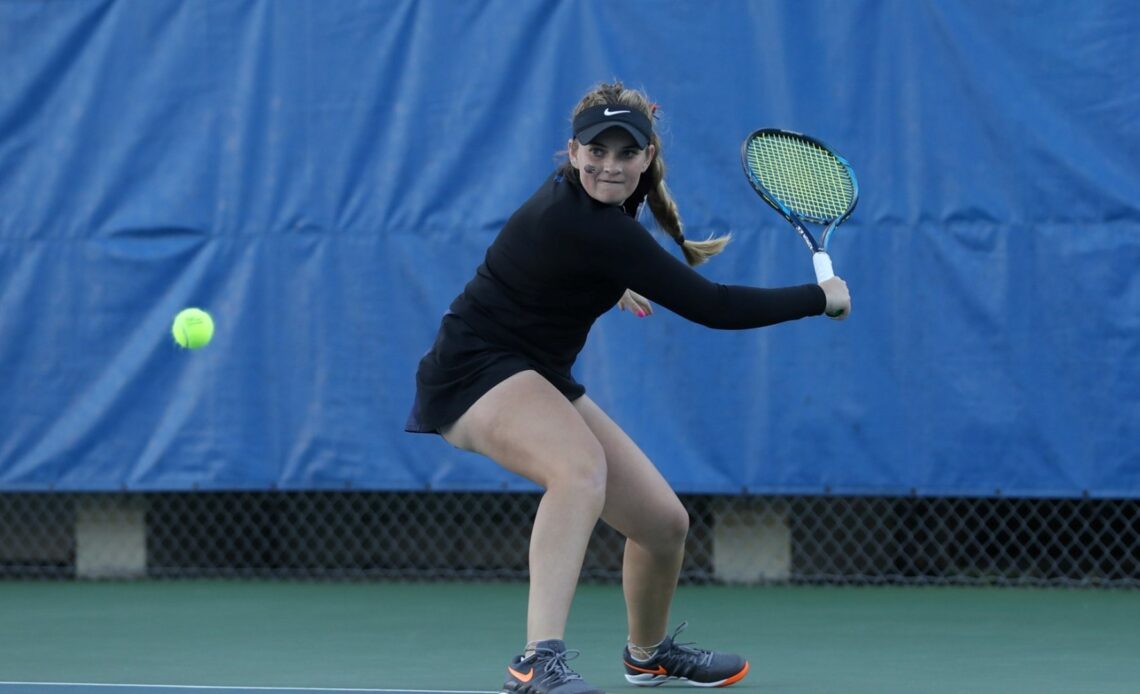 LAS VEGAS – The Gators’ women’s tennis squad picked-up five victories on a strong day one of the Freeman Memorial at the campus on UNLV on Friday.

Looking to lead the way this season, senior Carly Briggs earned perhaps the biggest win of the day, taking down No. 12 Janice Tjen in three sets. The Calhoun, Ga., native raced out to a 6-3 opening set win, but Tjen fought back to even the match behind a 6-1 second set. Briggs managed to pull away for the 6-4 set and match victory in the third set.

Not to be outdone by Briggs, Alicia Dudeney took down UCLA’s, and No. 46-ranked, Kimmi Hance in a three-set battle. Hance took a lead in the match after claiming the first set, 6-3. Dudeney responded with a 6-3 set of her own before keeping composure in the final frame to win a tiebreaker, 7-6(4).

Also picking up singles victories for the Gators, Sara Dahlstrom overtook Cindy Hu of UNLV in straight sets, 6-0, 6-1. Senior Emma Shelton found herself in a close matchup with Sasha Vagramov of UCLA. Vagramov held on for an exciting 7-6 finish in the opening set, but Shelton gained momentum after a 6-3 effort in set two. Returning the favor, Shelton solidified her victory by way of a tiebreaker, taking a 7-6 third set.

In doubles competition on Friday, Dudeney and Briggs earned the first victory of the 2023 campaign with a convincing 6-2 victory over Sasha Vagramov and Vanessa Ong of UCLA. The victory moves the duo into Saturday’s semifinal round where they’ll meet Anna Campana and Carolyn Campana of Pepperdine at 1 p.m. ET.

The Gators will return to action on Saturday, Jan. 14, at 10 p.m. ET for day two of the Freeman Memorial.

Quotes from the Court
Head Coach Roland Thornqvist
“Fantastic day on the courts for the Gators. We didn’t win all the matches, but they were all super competitive and it’s really high-level competition here. We had some outstanding performances, starting in doubles with Liss and Carly, who played very clean, aggressive doubles. The highlight, of many highlights, but in particular was Carly’s win over Tjen. Carly has shown steady progress in her play ever since she got here. She’s really buying in to being more attack-minded, aggressive and becoming a ball-striker. Today she really had to. She fought back from down four-to-two in the third, and winning four-straight games against Tjen is a hard feat. Overall, really pleased with the way we’re competing. We’re trying hard and even though in singles some of us aren’t…