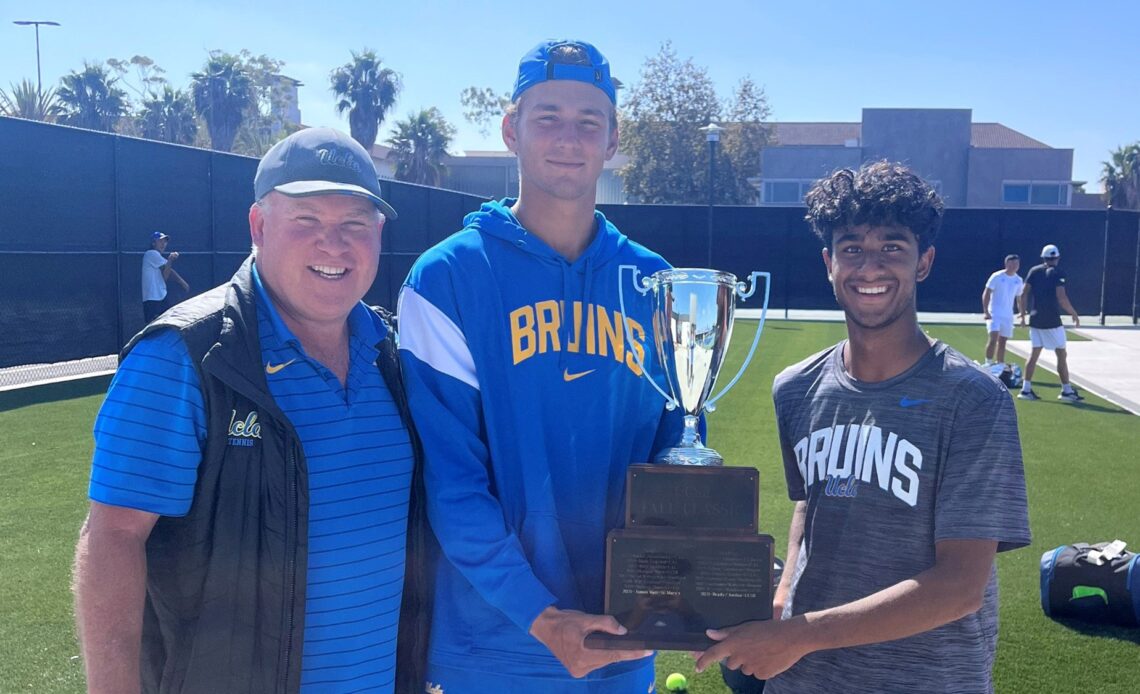 Fradkin and Tripathi, who was making his UCLA debut, earned three wins in three days, capping their weekend with an 8-3 defeat of Joe Leather and Bastiaan Weststrate of Cal Poly in the final. The Bruins’ path to the title also included an 8-6 victory versus Redd Owen and Wally Thayne of BYU in the quarterfinal round and an 8-7(7) triumph over Austin Di Giulio and Emin Torlic of Loyola Marymount in the semifinals.

Freshman Azuma Visaya also had a standout performance, reaching the A Flight singles semifinal round in his initial appearance as a Bruin. He downed John Bryan Otico of LMU and Gianluca Brunkow of UC Santa Barbara before falling to eventual champion James Watt of Saint Mary’s in three sets.

Fradkin beat Thayne in three sets to open singles play, but was then felled by Pablo Masjuan of UCSB. Junior Stefan Leustian suffered a three-set loss at the hands of Joe Leather of Cal Poly to begin his stay, but the Sacramento, Calif. native bounced back with a win against Ryoma Matsushita of New Mexico. While Tripathi dropped his opener, he would go on to win added matches with Matsushita, Fernando Fonseca of Cal Poly and Lucca Liu of UCSB.

The A Flight doubles draw also included the combination of Leustian and Visaya, which got the better of Matsushita and Georgio Samaha of New Mexico 8-6 in a consolation contest.

Next up for UCLA is the ITA Regional Championships, set for Oct. 19-23 at Ralphs Straus Tennis Center in Malibu, Calif.


Click Here to Read the Full Original Article at UCLA…