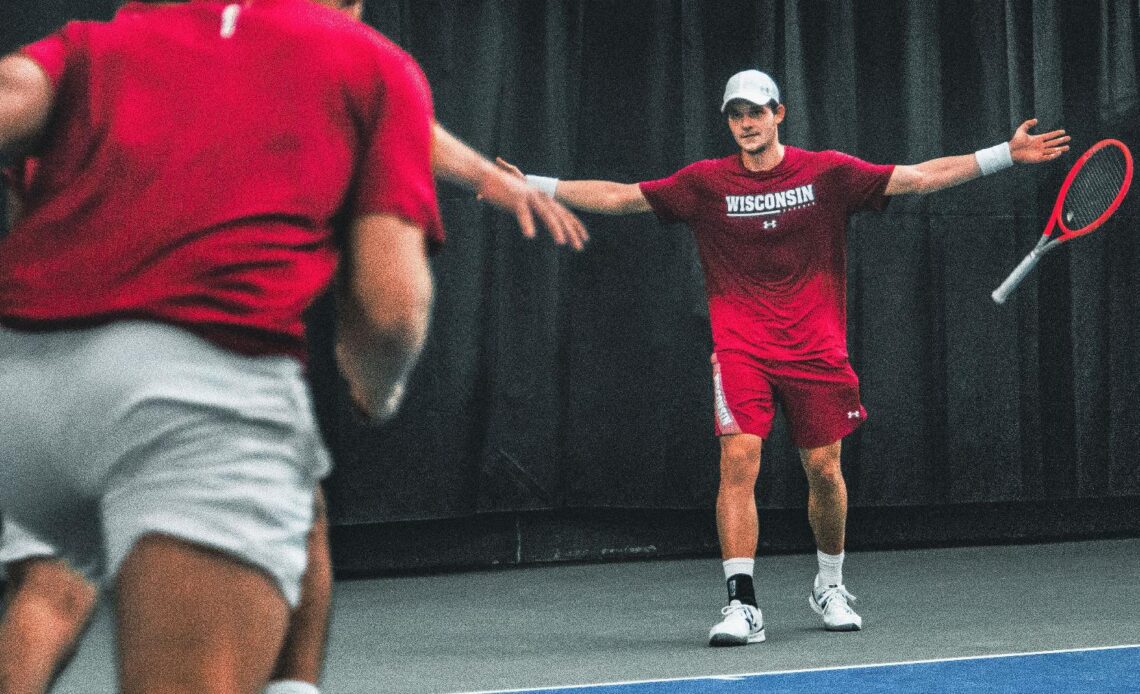 MADISON, Wis. — After a perfect 2-0 opening weekend at Nielsen Tennis Stadium, the Wisconsin men’s tennis team hits the road for the first time this season and travels to Virginia for a pair of non-conference matches. UW (2-0) plays Virginia Tech (2-0) in a neutral match on Saturday at noon CT in Norfolk, Virginia. On Sunday, the Badgers play at Old Dominion (3-1) at 10 a.m. CT.

Here are five things you should know before this weekend:

1. PERFECT WEEKEND: The Badgers recorded an undefeated opening weekend to start the season with two exciting matches at Nielsen. On Friday, UW dominated DePaul in an impressive 6-1 win, improving upon last season’s match where it rallied against the Blue Demons for a 4-3 win. Wisconsin came out on top in five singles matches and two doubles matches to best DePaul.

On Saturday, Princeton gave the Badgers a run for their money. After Wisconsin secured a 3-0 lead, the Tigers came fighting back, tying it up 3-3 when it all came down to junior Mihailo Popovic at No. 2 singles. He won his match in exciting fashion—securing the win in a third-set tiebreaker after dropping the first set.

2. DOMINATING DOUBLES: Doubles play for the Badgers so far this season has been stellar on all fronts. In both opening weekend matches, Wisconsin was able to secure the doubles point without dropping a single match. Robin Parts and Sebastian Vile, the veteran pair on the team, went 2-0 on the weekend, beating their DePaul competition 6-4 and Princeton 6-2 at No. 2 doubles. At No. 3 doubles, Jason Hildebrandt and Jared Pratt, the graduate student duo, clinched the doubles point versus DePaul by claiming a 6-3 victory and got the ball rolling for the other pairs by recording the first doubles win of the match against Princeton, 6-2. Both of Gabriel Huber and Michael Minasyan’s matches went unfinished, but the ITA Regional Doubles Champions were solid nonetheless, finishing their matches 5-2 and 4-5.

3. KNOW THE OPPONENT: The Virginia Tech Hokies are 2-0 on the season after hosting Queens (Charlotte) and James Madison last weekend at their home court in Blacksburg, Virginia. The Hokies dominated both matches, coming out with 6-1 wins in both instances. Virginia Tech was able to clinch both doubles points over the weekend with their only losses coming at No. 2 singles against Queens and No. 3 singles versus…