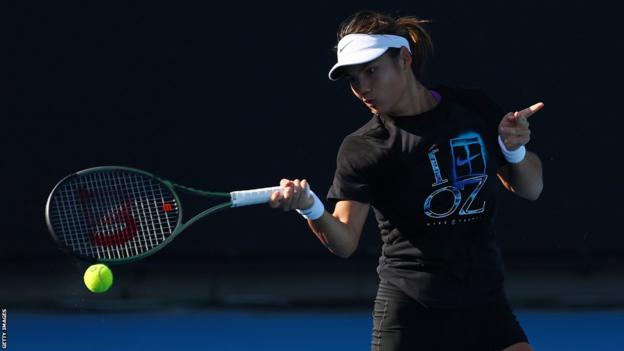 When Emma Raducanu took a stroll along Elwood Beach last Monday, she will have been very mindful of her footing.

It led to her sixth retirement since the start of last year, threatened her participation in the Australian Open, and punctured the optimism she had been feeling about the new year.

“We were thrown a bit of a curveball the first week,” was the way Raducanu put it.

But the ankle has healed, and even if preparation for this particular Grand Slam has been a little thin, the optimism has returned, too.

A core team is gradually taking shape. Sebastian Sachs is in position as the coach, Jez Green’s strength and conditioning expertise is bearing fruit, and physio Will Herbert is an increasingly frequent presence on tour.

Raducanu’s run of coaches has been well documented, but the word over the past few months is that she really is very keen to develop a long-term partnership with one of them.

Dmitry Tursunov decided in October he was not that man, warning – in an interview with tennismajors.com – that Raducanu was consulting too wide a range of voices.

“I think that the way I’ve been brought up, I’ve always had quite a lot of people around me and it’s more just been me picking and choosing what I want to take and what I want to leave,” the British number one told BBC Sport in response to the Russian’s comments.

“So for me this year, now I feel like I’ve definitely got that more so, and I don’t probably need to consult as widely any more.”

Sachs is young, at 30, and having had a brief career as a player on the Futures Tour, can also double as a very handy hitting partner.

A calm and attentive man, he has already worked in a coaching capacity with Victoria Azarenka, Julia Gorges and then Belinda Bencic, who became a top-10 player and an Olympic champion under his watch.

“We kind of build off each other’s ideas, and he’s just a really good person to have in the team as well,” Raducanu said. “I think that’s been going really well so far and I really want to carry on and for it to last.”

Herbert’s healing hands will have been invaluable…