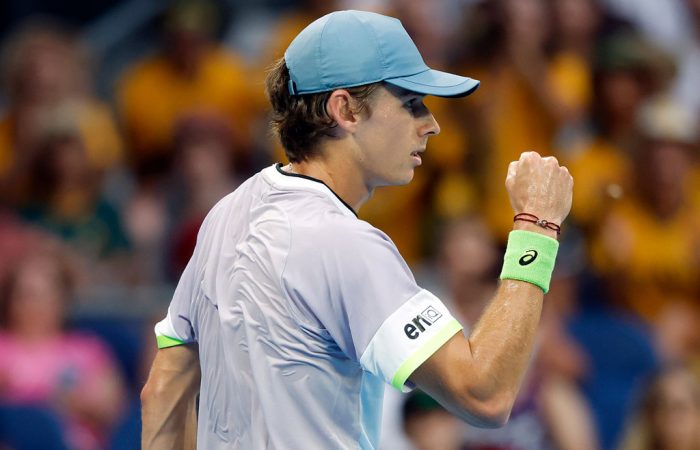 Alex de Minaur makes an impressive start to his Australian Open 2023 campaign, the No.22 seed competing with ruthless efficiency in a dominant first-round win.

On a day that had a little bit of everything at Melbourne Park – extreme heat followed by wild rains – Alex de Minaur was in no mood for drama as he launched his Australian Open 2023 campaign.

Rather, the No.22-seeded Australian was ruthlessly efficient as he progressed past Chinese Taipei qualifier Hsu Yu-Hsiou at John Cain Arena, taking just over two hours to complete his 6-2 6-2 6-3 win.

“I knew it was going to be a tough match but I’m just happy to be here in Australia,” said De Minaur, explaining post match how he’d carefully scouted his first-time opponent.

“Playing in front of you guys, there’s no better feeling. It doesn’t matter who I play, I’m going to be up for it.”

While the 208th ranked Hsu was making his main-draw debut at Grand Slam level, De Minaur is contesting his sixth Australian Open and 21st major overall.

The disparate experience showed from the outset, as a typically energised De Minaur engaged keenly in rallies and capitalised on untimely errors from Hsu.

The biggest frustration for the Australian was arguably a rain delay, with play paused after the sixth game while the roof was closed. It halted none of De Minaur’s momentum as he quickly closed out the set when play resumed.

A 47 per cent first serve success rate provided room for improvement, De Minaur elevating the pressure as he found his serving groove. That number increased to 71 per cent in the business-like second set, De Minaur breaking Hsu’s serve to love to take a 3-2 lead, extending the advantage with another break in an elongated seventh game.

Hsu, by contrast, was unable to a earn any break point opportunities; De Minaur underlined his dominance as he won five straight games to take a two-set lead.

The Australian immediately added to that authority, taking a 2-0 lead in the third-set. While concentration briefly wavered, De Minaur was never legitimately troubled as he completed a pleasing victory in straight sets.

With his 26 winners boosted by eight aces and not a single double fault,…