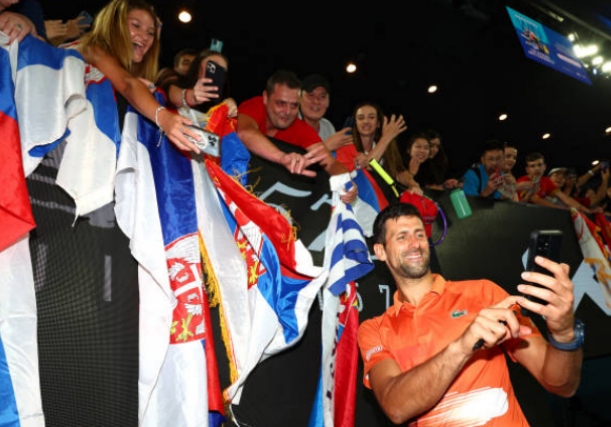 The shots came from every conceivable angle.

Novak Djokovic faced each one with a smile.

Davenport: Three Women Who Can Win Maiden Major in Melbourne

A year after Djokovic was deported from Australia over his unvaccinated status in a controversial case that drew global attention, fans in a sold-out Rod Laver Arena embraced and cheered the former world No. 1.

“I’m very happy, thank you so much,” Djokovic told fans in Rod Laver Arena. “I feel a bit emotional right now, to be honest. I was really looking forward to coming back to this court, so thank you, guys, for coming out tonight for a great cause.”

This match is turning into a hilarious spectacle 🎾😆

The 35-year-old Serbian superstar sported black kinesiology tape on the back of his left leg to protect the strained hamstring he sustained en route to his 92nd career title in Adelaide last week.

The fourth-seeded Djokovic moved well and said he feels pain-free ahead of his quest for a 10th AO title and a men’s record-tying 22nd Grand Slam championship.

“Yeah, I’m feeling good; feeling good,” Djokovic said in his pre-match on-court interview. “This is the match I care only about right now: Nick! Nick is in my thoughts, he is in my prayers!”

The six-time ATP Finals champion Djokovic could face the 19th-seeded Kyrgios in the AO quarterfinals.