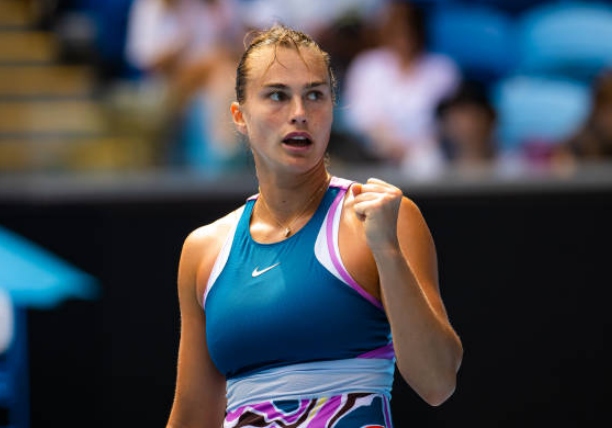 The fifth-seeded Sabalenka swept her former doubles partner, Elise Mertens 6-2, 6-3, rolling into the Australian Open fourth round for the third straight season.

The woman sporting the colorful tiger tattoo on her left forearm has restored the roar to her game, while calming the noises in her hand and tuning into a more positive approach on court.

Sabalenka raised her record to 7-0 on in 2023, including her run to her 11th career title in Adelaide earlier this month. She’s not only winning, she’s been commanding: Sabalenka has swept all 14 sets she’s played this season.

The three-time Grand Slam semifinalist said “overdreaming” and “overthinking” on court have been stumbling blocks to her pursuit of a singles Slam in the past.

Managing her mind and keeping things simple are keys Sabalenka cites to capturing a maiden major in Melbourne.

Amid the storm of winners she can unleash, Sabalenka says she’s striving to keep a calm and clear head when stress arrives.

“Finally I understand what everyone was looking for and asking for,” Sabalenka said. “Yeah, as I said, I need to be a little bit boring on court. I mean, it’s still about a lot of positive emotions for me, but I’m trying to stay away from negative and just fight for every point.”

Most importantly, Sabalenka has sharpened her serve and minimized the double faults that devoured her game, at times, in recent years.