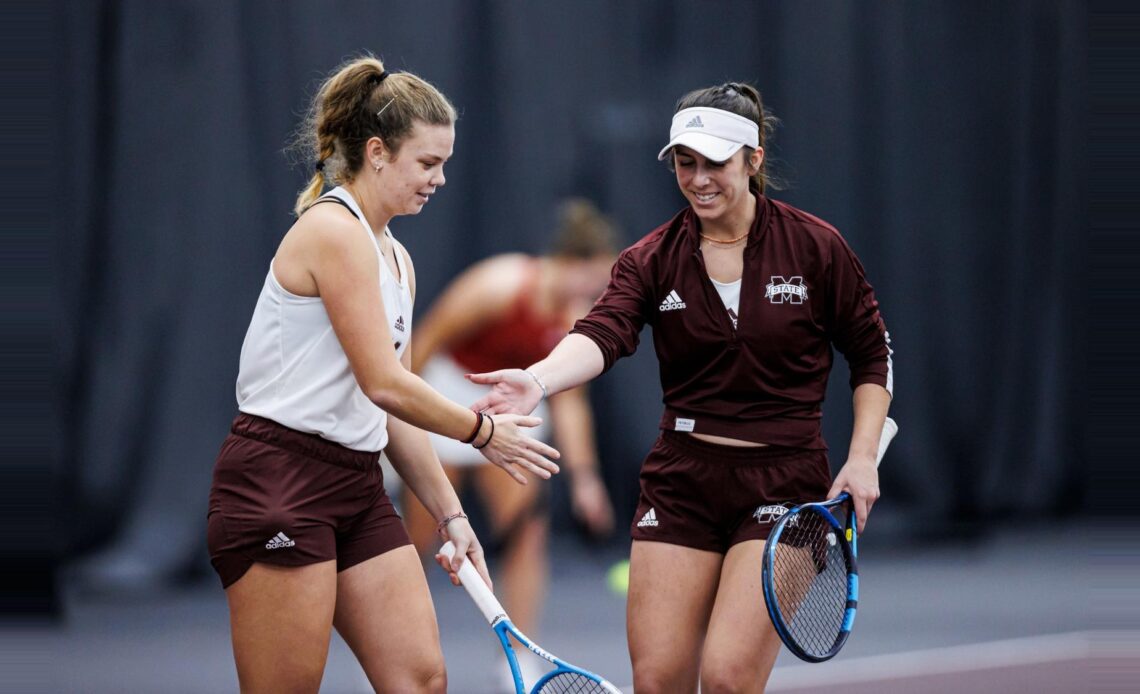 The Bulldogs blanked the Red Wolves 7-0 in the first match and won the second match 4-3 to improve to 4-0 on the season.

“We had some players playing their first match in Maroon and White and I thought overall we did a good job,” head coach Daryl Greenan said. “Arkansas State was a feisty team and we just stayed on top of them. I’m proud of the way the girls got it done today.”

In doubles, the MSU tandem of Emmanouela Antonaki and Gia Cohen blanked Rebecca Brody and Sarah Millard 6-0. The duo of Sydney Hrehor and Emily Surcey earned a 6-0 victory over ASU’s tandem of Yasmine Humbert and Abby Thurmer to clinch the doubles point for State.

Dharani Niroshan clinched the match for MSU with a 6-3, 6-1 victory over Arkansas State’s Abigail Thurmer. No. 61 Maria Rizzolo extended State’s lead with a 6-4, 6-1 win. Emily Surcey earned a 6-2, 6-1 victory, while Maddie Bemisderfer closed out the match with a 6-3, 6-4 victory.

“We had a great crowd,” Greenan said. “It’s come a long way in my time here with the fan support and we really appreciate that. We had a couple of teams here to watch. It defiantly puts a little pressure on our girls which is ultimately good, because they want to perform. The excitement and energy really helps.”

For the second match of the day against Jacksonville State, Cirotte earned her second win of the day with a dominate 6-1, 6-2 win. MSU’s Alexandra Mikhailuk defeated Anna Syrova 6-2, 6-2, while Antonaki followed with another win for State.

Cohen earned the clinching win over Romane Mosse. Cohen took the first set 6-4, while Mosse came back to take the second 6-2. Cohen stormed back in the third set with a decisive 6-3 victory.

In doubles, Antonaki and Cohen blanked the JSU tandem of Mosse and Serafime Shastova 6-0. The Jacksonville State duo of Irene Artigas and Polina Ramenskaja defeated Mikhailk and Rizzolo 6-4, while Anna Syrova and Ella Tuomela took down MSU’s duo of Cirotte and Niroshan 6-4.