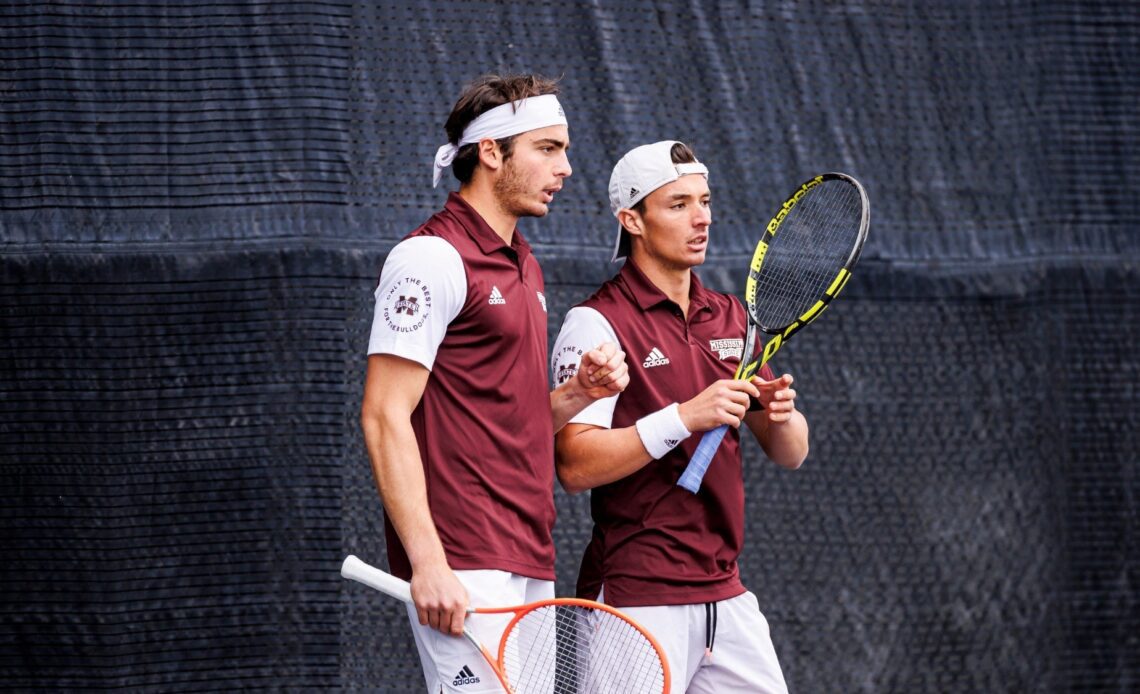 
STARKVILLE – Mississippi State men’s tennis is off to a roaring start to the season.

Not only are the Bulldogs 2-0, they have outscored their opponents 13-1 in the opening two matches. MSU earned the second of those wins on Monday by blanking South Alabama 7-0 in their first outdoor outing of the year at the A.J. Pitts Tennis Centre.

“We’ve been practicing a lot outside and were ready to play some outdoor tennis,” said head coach Matt Roberts. “It was good to get out here and play a tough South Alabama team.”

Although MSU was able to sweep all six singles matches, the Jaguars (3-1) put up a quite a fight in doubles to start the day. The Bulldogs’ 42nd-ranked duo of Carles Hernandez and Nemanja Malesevic, however, began with a huge 6-3 victory over USA’s 16th-ranked team of Jack Clements and Louis Delcour.

“I didn’t even know they were ranked 16th until after the match actually,” Hernandez said. “Honestly, we really don’t pay attention to those things. We just go straight to what we’ve done in practices and go out there with a lot of energy and try to have as much fun as possible.”

After Ewen Lumsden and Michal Novansky dropped their doubles match 6-3 to Sebastien Collard and Steyn Dippenaar, it was up to Petar Jovanovic and Gregor Ramskogler to secure the point for State.

Jovanovic and Ramskogler fought through three match points and rallied to win 7-5 over Juan Accossatto and Maxime St-Hilaire.

“It was a challenging doubles point,” Roberts said. “I was really happy with how Gregor served it out and how they stayed resilient. It came down to Pete and Gregor’s court. They made a good push at the end and that’s big for our team moving forward.”

The doubles win was the 75th of Ramskogler’s career, which moved him into a tie with Trevor Foshey (2016-19) for the eighth-most doubles victories at Mississippi State. He also stands alone at sixth on the school’s all-time dual match doubles wins list.

In singles, MSU was able to secure five of its courts in straight sets. Benito Sanchez Martinez notched the Bulldogs first singles victory, breezing past Accossatto 6-2, 6-1. Lumsden wasn’t far behind with his 6-2, 6-1 victory against Javier Montoya and Jovanovic – ranked 107th in singles – clinched the win with a 6-3, 6-3 showing against Clements.

Novansky made his collegiate singles debut on Monday and found…