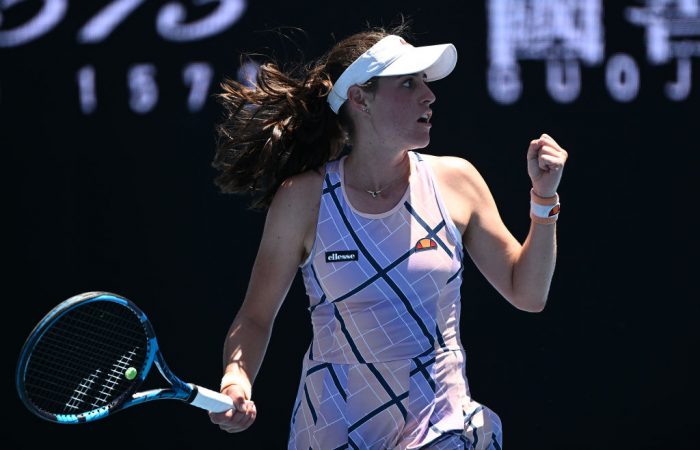 Kimberly Birrell has fought back from the brink of defeat to eliminate No.31 seed Kaia Kanepi in the opening round at Australian Open 2023.

Kimberly Birrell created history at Australian Open 2022, winning the first competitive match ever played at Kia Arena. And her return to that court this year, proved even sweeter.

The 24-year-old Aussie wildcard recorded a hard-fought 3-6 7-6(4) 6-1 victory against No.31 seed Kaia Kanepi in an opening-round singles showdown at Kia Arena today.

✨ Birrell Brilliance ✨@kimbirrell98 produces a stunning performance to comeback and knock out the No.31 seed Kaia Kanepi, 3-6 7-6(4) 6-1 👏#GoAussies • #AusOpen pic.twitter.com/qNxJTJKtaS

The promising Aussie made the third round at AO 2019 and achieved a career-high ranking of No.154 a few months later, before injury threatened her career. She has since bravely bounced back from two elbow surgeries.

Birrell returned at last year’s Australian Open, reaching the final round in qualifying as a world No.669-ranked wildcard. She admitted at the time she was “so grateful” to even be playing again after a challenging couple of years.

It was the start of a resurgent season for Birrell, who soared back into the world’s top 200 after reaching three ITF finals.

Her incredible grit was on show against 37-year-old Kanepi, an Australian Open 2022 quarterfinalist. The world No.29-ranked Estonian served for the match leading 6-3 5-4, but Birrell managed to fight her way back into the contest.

After securing a high-pressure second-set tiebreak, Birrell won 16 of the first 19 points in the deciding set to race to a 4-0 lead.

From there, the Gold Coast athlete closed out one of the biggest – and emotional – wins of her career after two hours and 32 minutes on court.

Birrell now faces Czech teen sensation Linda Fruhvirtova, who recorded a 6-0 6-4 win against Australia’s Jaimee Fourlis today. The 17-year-old Fruhvirtova is currently ranked No.82 and is the youngest player inside the world’s top 100.

Birrell and Fourlis were among nine Australians scheduled to compete on day two at Melbourne Park. This also includes world No.24 Alex de Minaur, who plays his first-round match at John Cain Arena this evening.