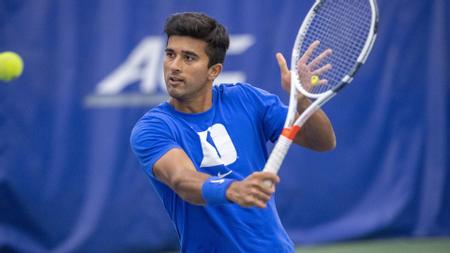 DURHAM – No. 20 Duke men’s tennis is set to open its home slate with three matches at the Sheffield Indoor Tennis Center this weekend.

The Blue Devils host Memphis at 6 p.m., on Friday before welcoming No. 16 Harvard and North Carolina Central for a doubleheader on Sunday at 1 and 6 p.m., respectively. Parking is available in the Blue Zone. To view the map, click HERE (PDF). Friday’s contest against the Tigers and Sunday’s match against the Crimson will be Royal Blue matches.

Three Duke singles players and one doubles pair were ranked by the ITA in its final fall listing. Senior Garrett Johns placed No. 4 in singles, while rookie Pedro Rodenas and senior Andrew Zhang earned a ranking of No. 84 and No. 101, respectively. The Blue Devils also saw the doubles duo of Michael Heller and Zhang ranked, garnering a No. 49 placement.

Live stats and video are available for all matches.

Friday’s contest is the second all-time meeting between the two programs with Duke winning the previous matchup on Jan. 24, 2015, 4-0, in Durham.

Memphis opened its spring schedule last weekend when it competed in the MLK Invitational, hosted by Yale University. The Tigers combined to register a 31-5 ledger over the three-day event with the Bulldogs, Vanderbilt, and Charlotte.

HISTORY WITH NO. 16 HARVARD

Sunday’s contest is the 16th all-time meeting between the two programs with Harvard holding the 13-2 edge in the series. The Blue Devils won the teams’ last meeting on March 26, 2010, 4-0, in Cambridge, Mass., but prior to that the Crimson had strung together four consecutive victories.

Harvard opens its 2023 spring season on Friday at No. 21 NC State before traveling to face off against Duke on Sunday. In the final singles and doubles rankings of the fall season, the Crimson…