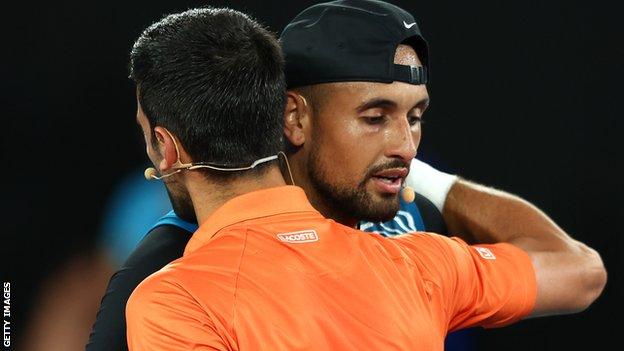 Novak Djokovic received an adoring welcome on his first public return to the Australian Open for a practice match with home favourite Nick Kyrgios.

The 35-year-old Serb was deported before last year’s tournament after a row about his Covid-19 vaccination status that divided public opinion.

“I’m very happy. Thank you so much,” said Djokovic after walking on to Rod Laver Arena to a rapturous reception.

“I feel a bit emotional. I was looking forward to coming back to this court.”

Djokovic returned to Australia last week and received a warm welcome when he played in Adelaide, where he won the ATP 250 event.

But there was fascination regarding how he would be received back in Melbourne, which endured some of the toughest coronavirus lockdowns in the world.

In a city with a huge Serb population, hundreds wore the Balkan nation’s colours as Djokovic stepped out there for the first time since 2020.

Earlier this week, Australian Open tournament director Craig Tiley asked fans to be respectful, warning they would be kicked out of Melbourne Park if they booed Djokovic.

The former world number one’s name was greeted with loud cheers when it was read out – drowning out a couple of boos – before he entered the court.

Only a deafening roar could be heard as he walked on to the court, where the nine-time champion has enjoyed some of his biggest successes.

The warm-up event raised money for charity, with the 15,000-capacity Rod Laver Arena selling out in 58 minutes when tickets were released on Tuesday.

Djokovic, going for a record-extending 10th title and record-equalling 22nd men’s major, has been managing a hamstring injury but said before the exhibition he was “feeling good”.

He and Kyrgios shared two sets, which were the first-to-four points, and which offered little insight into their Australian Open preparations.

The pair were joined on court by wheelchair players David Wagner and Heath Davidson, and then two junior players, in a deciding tie-break which Team Kyrgios won.

“It feels great to be back in Australia and back in Melbourne. It is the court where I…