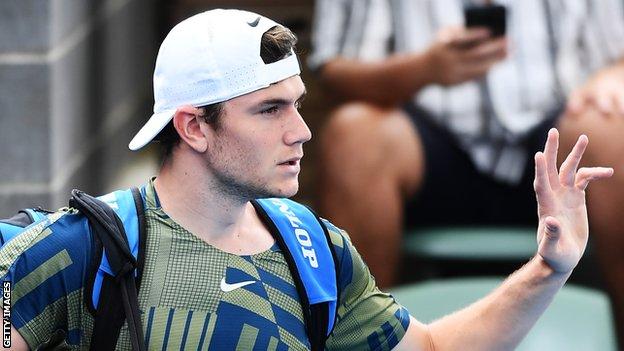 Emma Raducanu, who has been struggling with an ankle injury, has been drawn against Germany’s Tamara Korpatsch.

Raducanu, 20, could face seventh seed Coco Gauff in the second round.

After learning of his first-round meeting with 2022 winner Nadal, Draper said it would be “amazing to play on court with him”.

“He’s a great champion,” the 21-year-old added. “Whatever happens, it will be a special occasion for me.

“I’m still very young in my career so it’s great to have these sort of experiences and exposure to playing someone like Rafa on a big court like that.

“But I want to play really well and I want to compete hard and do the best I can.”

The Australian Open, which is the first Grand Slam tournament of the new season, takes place at Melbourne Park between 16 and 29 January.

Draper emerged as one of the rising stars on the ATP Tour last year and the left-hander has continued his rapid progress this season by reaching the Adelaide semi-finals.

But his debut in the main draw at Melbourne Park could not have been much tougher.

Nadal, 36, is the defending champion and, although he has struggled with injuries and lost his two matches so far this year, remains a daunting prospect for most opponents.

However, the 22-time major champion would also probably not wish to start against a young talent who possesses the power and confidence of 40th-ranked Draper.

Former world number one Murray will also be cursing his misfortune.

The 35-year-old Scot impressed earlier on Thursday by beating Australian Alex de Minaur in an exhibition match at the Kooyang Classic, saying afterwards he hoped for a kind draw at Melbourne Park.

Instead he was pitched against Italy’s Berrettini, whose big serving troubles most opponents and who reached the semi-finals last year.

What about the other British…