Australian Open: Ben Shelton making a global name on his first trip out of United States 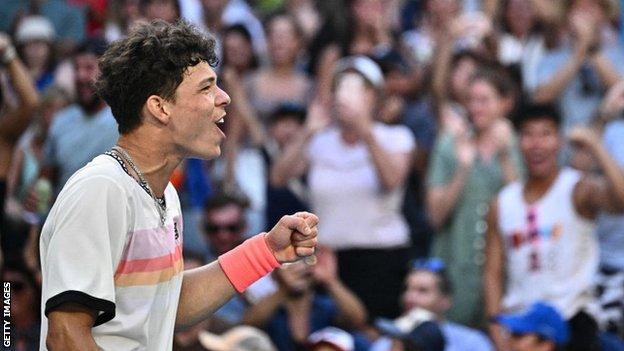 Ben Shelton had never been out of the United States before travelling to the other side of the world to start his Australian Open preparations.

Ticking off some of Melbourne’s famous sights are on the to-do list for a talented youngster who is combining his burgeoning professional career with an online business degree.

For now, the tourist trips remain on hold.

“After the tournament, I will hopefully see a few cool things. You can’t come all this way and not take in the sights,” the world number 89 told BBC Sport.

“But right now we stick to the routine.”

The routine is working. Shelton was ranked outside of the top 500 a year ago and still playing for the University of Florida college team.

He had never won a Grand Slam match before four victories at Melbourne Park over the past week.

On Wednesday, he faces his toughest test yet when he plays Tommy Paul – also an unseeded American but ranked 54 places higher – for a spot in the semi-finals.

“Leaving the States for the first time definitely felt strange at first,” said Atlanta-born Shelton, whose father Bryan is a former professional on the ATP Tour.

“It took me a little bit of time to get over the jetlag and feel like I had got my feet under me after the trip.

“I’m feeling pretty good physically now but it was definitely a difficult adjustment.

“I’ve been across the States – from Florida to California – and got my passport in 2019. Finally I got to use it.

“Getting to see two new countries, Australia and New Zealand, has been a cool experience so far and I’m looking forward to seeing more of the world over the coming months when I’m on the tour.”

Shelton’s only previous appearance at a major was a first-round defeat at last year’s US Open, for which he earned a wildcard by winning the prestigious National Collegiate Athletics Association (NCAA) title in May.

By the time he played at Flushing Meadows in August,…