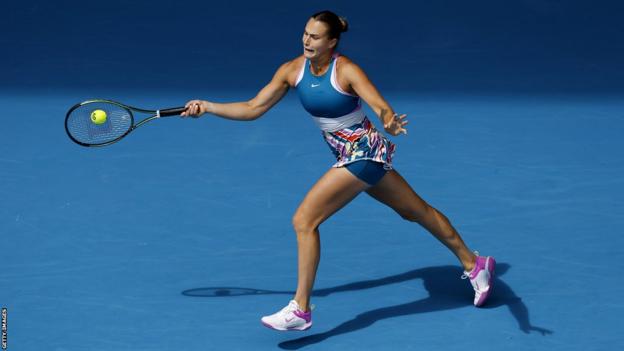 Making her sixth main-draw appearance at a Grand Slam, world number 113 Volynets is the first American qualifier to reach the Australian Open third round since Lindsay Davenport in 1993.

She said of her time on Margaret Court Arena: “I’ve never played in a stadium this packed and that many people keeping the energy up for me.”

Volynets will face Zhang Shuai next after the Chinese 23rd seed beat Petra Martic 6-3 6-3, while Sabalenka plays Elise Mertens after the Belgian’s 6-4 6-3 victory against Lauren Davis.

Garcia will meet Germany’s Laura Siegemund in the third round. The German brought Romanian Begu’s challenge to an end in a 5-7 7-5 6-3 victory that took three hours and 12 minutes.

Estonia’s Kontaveit lost 3-6 6-3 6-4 to Poland’s Magda Linette, who will meet Ekaterina Alexandrova next.

Russian Samsonova was swiftly seen off by Donna Vekic, the Croatian winning 6-3 6-0 in one hour and six minutes. Vekic will play Spain’s Nuria Parrizas-Diaz in the third round.