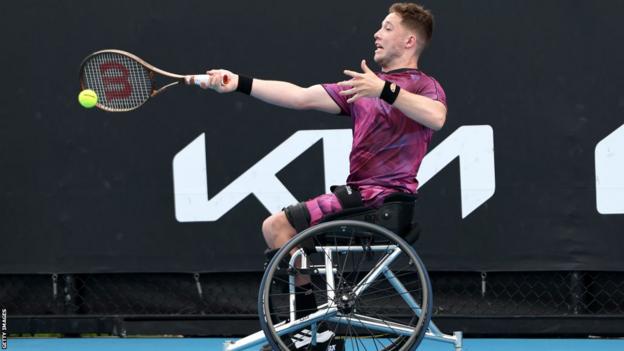 Alfie Hewett reached the semi-finals of the Australian Open men’s wheelchair singles by beating Gordon Reid before the British pair made a winning start to the defence of their doubles title.

The duo are chasing a fourth successive wheelchair doubles title in Melbourne.

Hewett is a two-time finalist and is seeking his first Australian Open singles title, having won both the French Open and the US Open three times.

Elsewhere, 17-year-old Ben Bartram couldn’t follow his compatriots through to the doubles semi-finals as he and Japanese partner Tokito Oda lost 6-7 (6-8) 7-5 10-5 to Daisuke Arai and Takashi Sanada, also of Japan.

In the women’s wheelchair doubles, Britain’s Lucy Shuker and American partner Dana Mathewson reached the semi-finals with a 6-2 6-3 win.

But there was defeat for Andy Lapthorne and American partner David Wagner in the quad wheelchair doubles as, despite their seeding of second, they were beaten 7-5 6-3 in the semi-finals.