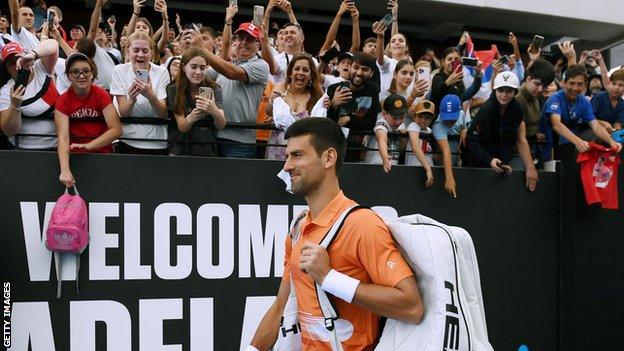 Novak Djokovic returns to the Australian Open a year on from his controversial deportation, again primed as the man to beat at the opening Grand Slam tournament of the 2023 season.

The 35-year-old Serb, aiming for a record-extending 10th title in Melbourne and a record-equalling 22nd men’s major, has warmed up by winning an ATP title in Adelaide.

Spanish teenager Carlos Alcaraz, ranked the world’s best men’s player, has pulled out with a knee injury and is one of several high-profile names to miss out.

British women’s number one Emma Raducanu suffered an ankle injury in the build-up, initially putting her participation in doubt but the 20-year-old is now seemingly winning her fitness battle.

Raducanu will be hoping to be one of seven Britons playing in the singles main draws, with 11th seed Cameron Norrie and Andy Murray headlining the men’s interest.

This will also be the first Grand Slam event following the retirements of veteran superstars Serena Williams and Roger Federer.

With the tournament starting on Monday, BBC Sport runs through the major talking points.

Djokovic is still the man to beat

The build-up to this year’s tournament has been much quieter than 12 months ago – but Djokovic remains the centre of most of the attention.

After a cancelled visa, detention in an immigration centre, multiple court cases and eventual deportation – all as a consequence of him being unvaccinated against Covid-19 – Djokovic was unable to play in the 2022 edition of a tournament which he has long dominated.

On his return, the Serb will be glad to focus on the tennis and looks well placed to regain his stranglehold on the trophy.

The nine-time champion has won the title on his past three appearances and has lost only three matches at Melbourne Park since 2011.

A limited schedule, partly down to not being allowed to enter the United States last year because of his vaccination status, means he is ranked fifth in the world but a strong end to last season, and confident start to this year, shows he still remains the man to beat.

Winning the Adelaide title last week came after triumphs in Tel Aviv, Astana and the ATP Tour Finals in 2022, with the only defeat in…