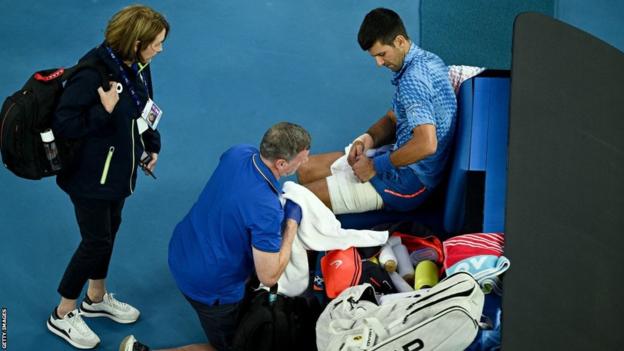 Novak Djokovic defied more hamstring troubles to beat Grigor Dimitrov in straight sets and reach the fourth round of the Australian Open.

Serbia’s Djokovic picked up the injury before the tournament and opted not to train on Friday to rest it.

“Every point, every game mattered,” the 35-year-old said on Saturday.

“Obviously I didn’t know how I’m going to feel physically, it was going up and down.

“It was an incredible battle, three sets over three hours.”

Djokovic is hoping to win a men’s record-equalling 22nd Grand Slam title at Melbourne Park and it seems his to lose after a large number of seeds fell in the early rounds.

Defending champion Rafael Nadal, who holds the record, had been deemed one of Djokovic’s biggest rivals for the title but he was knocked out in the second round after a hip injury hampered his performance.

Djokovic’s reward for his win over Dimitrov, in which he again sported heavy strapping on his left thigh, is a meeting with Australian 22nd seed Alex de Minaur.

“Every season counts when you come to the last stage, the last quarter, of your career,” he said.

“Obviously you start appreciating and valuing each tournament more because you might not have a lot left in the tank.

“I love the sport, I love competing. It’s been almost 20 years now of professional sport. I can’t be more grateful than I am.”

Americans Tommy Paul, Ben Shelton and J.J. Wolf also progressed to the fourth round, all in straight set wins.