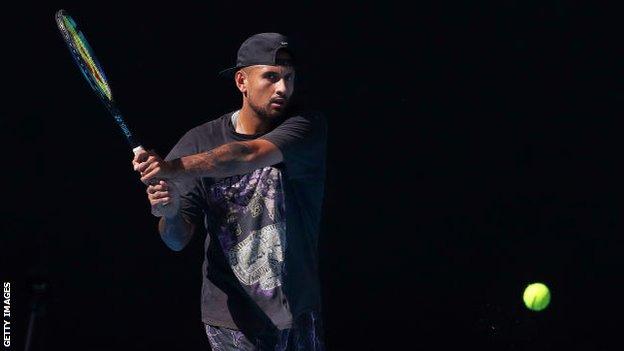 Home favourite Nick Kyrgios pulled out of the Australian Open with a knee injury the day before he was scheduled to play his opening match.

The Wimbledon runner-up, 27, said he was “devastated” he could not play in Melbourne.

“It’s obviously been pretty brutal before [one] of the most important tournaments of my career,” Kyrgios said. “It hasn’t been easy at all.”

Considered among the favourites to win the title, Kyrgios “didn’t pull up great” from an exhibition with Novak Djokovic on Friday, according to his physio Will Maher.

Maher said they had used the charity event as “a gauge” to see if the player could compete at the highest level.

But afterwards he advised the Australian he would potentially not be able to play a succession of five-set matches over the fortnight.

“He still tried to give himself every chance in the following days to have subsequent training,” Maher added.

“But it was clear with each passing session that he was getting sorer and sorer.”

Kyrgios, who will be unable to defend the men’s doubles title here, will need an operation because of a cyst growing in his meniscus but expects to be fully recovered to play At Indian Wells in March.

“Obviously last year winning the title in doubles and playing the best tennis of my life probably. Then going into this event as one of the favourites, it’s brutal.”