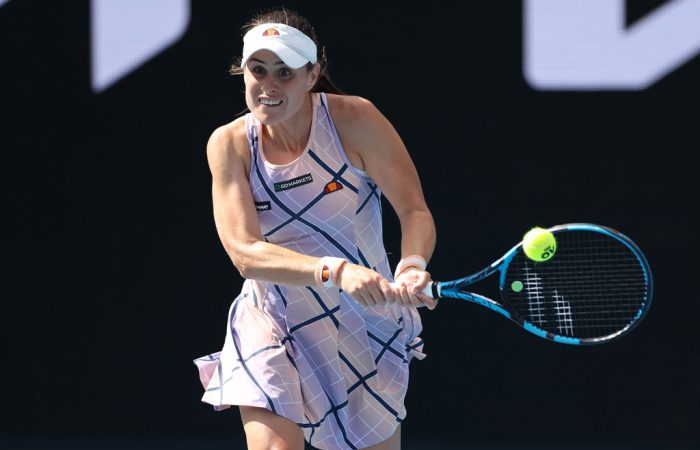 A memorable Australian Open campaign has ended in the second round for popular Queenslander Kimberly Birrell.

After her inspired comeback against No.31 seed Kaia Kanepi in the Australian Open on Tuesday, another come-from-behind victory wasn’t to be for Kimberly Birrell.

The Queenslander today bowed out to Linda Fruhvirtova, with the Czech teenager claiming a 6-3 6-2 win in the second round.

Despite the straight-sets scoreline, the highly touted 17-year-old was forced to work hard for her victory. As both points and games were extended by a determined Birrell, Fruhvirtova required an hour and 24 minutes to secure her place in the third round.

While an early break provided the Czech with the perfect beginning as she raced to a 3-0 advantage, resilience was always going to factor for Birrell.

She had endured extended periods of painful rehab to overcome career-threatening elbow injuries and that fighting spirit was sensationally on display when she recovered from a set and a break deficit to overcome Kanepi, an AO 2022 quarterfinalist, in the first round.

Birrell underlined that staying power as she persisted to create break point opportunities and eventually gained the break back in the seventh game. It was a temporary reprieve, with the Queenslander unable to consolidate and the nerveless Fruhvirtova serving out the set.

The world No.84 Czech, who has spent years developing her game at the famed Patrick Mouratoglou Academy, is the youngest member of the WTA’s top 100 and claimed a first WTA title in Chennai last year.

It helped in stages, including when the Australian recovered from a 0-40 deficit as she served at 1-3 in the second set, but a wise-beyond-her-years Fruhvirtova refused to be overwhelmed.

“It was an incredible atmosphere here today even though most of you wanted Kim to win,” said the smiling teenager after completing her victory. “I enjoyed playing on this court.”

But so too did Birrell, who only recently doubted her playing future as she worked her way back from…