Australian Open 2023: Arnya Sabalenka, Belinda Bencic through to fourth round 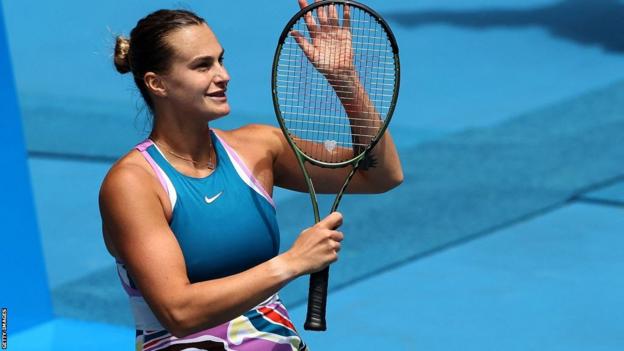 Fifth seed Aryna Sabalenka continued her strong form at the Australian Open with victory over Elise Mertens to reach the fourth round.

The Belarusian, who is aiming for her first Grand Slam singles title, beat her Belgian former doubles partner 6-2 6-3 on Saturday.

The 24-year-old has yet to lose a match in 2023, having won the Adelaide International 1 title in the build-up to the first major of the year.

She will next face Belinda Bencic.

Swiss 12th seed Bencic reached the fourth round with a 6-2 7-5 win over Camila Giorgi of Italy.

She is on a nine-match winning streak, having won the Adelaide International 2 title earlier in January.

Sabalenka said she would have to be “like a tiger” to beat Bencic, with both players yet to drop a set at Melbourne Park.

“I feel like I have to stay really aggressive in the first few shots and then the slower ball or shorter ball will come,” Sabalenka said.

“It’s all about fast feet on the first few shots. I have to be like a tiger, ready, stay low and be ready for that.”

Karolina Pliskova and Donna Vekic also advanced to the last 16 in the women’s singles on Saturday.

Czech teenager Linda Fruhvirtova, 17, reached the fourth round of a Grand Slam for the first time with a 7-5 2-6 6-3 win over compatriot Marketa Vondrousova.

In the women’s doubles, American pair Coco Gauff and Jessica Pegula beat Wang Xinyu of China and Japan’s Moyuka Uchijima 7-5 6-1 to reach the third round.