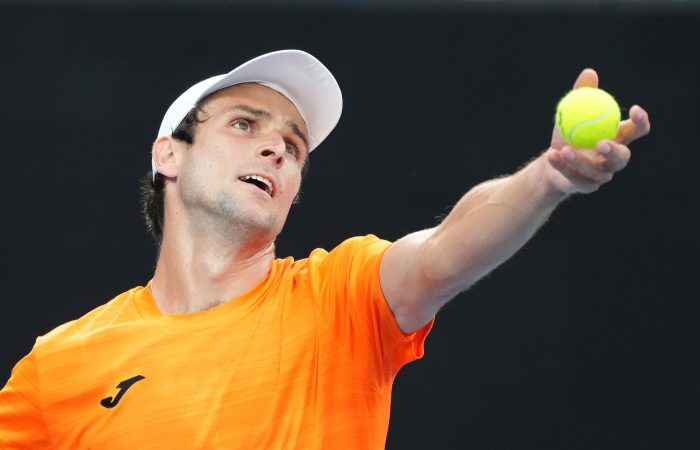 Three Australians – Aleksandar Vukic, Max Purcell and Tristan Schoolkate – have advanced to the final round in the AO 2023 men’s qualifying singles competition.

Aleksandar Vukic returns to the setting of his biggest career win today.

The 26-year-old from Sydney is scheduled to play his final-round match in the Australian Open 2023 men’s qualifying competition at Melbourne Park’s Court 3.

Vukic recorded his maiden Grand Slam main-draw victory on that very court last summer, beating then world No.33 Lloyd Harris of South Africa in a four-set opening-round battle at AO 2022.

“I hit on Court 3 the other day and I had goosebumps remembering the match I played there,” Vukic said. “I only have good memories.”

The world No.129 is hoping to create more special memories today by qualifying at his home Slam for a first time.

“We only have this event once a year, and what an event it is,” said Vukic, who made Australian Open main-draw appearances in 2021 and 2022 as a wildcard.

“Us Aussies we’re on the road for a long time, so it’s so nice to be back home. We give it 110 per cent, as you can see from the results in qualifying.”

The Australian Open 2023 qualifying competition concludes today, with three Aussie men remaining in contention to earn a coveted main-draw spot. This matches the most to reach this stage in the past 25 years.

Tickets to attend Australian Open qualifying are just $5 for kids and $10 for adults. Fans will also be able to see some of the world’s top-ranked players compete in practice matches at Melbourne Park.

Max Purcell (AUS) v [22] Matteo Arnaldi (ITA)
Men’s qualifying singles, final round, Court 7, first match (from 10am)
Purcell is attempting to qualify at the Australian Open for a second time – and for the first time since 2020. The 24-year-old from Sydney, who is a two-time AO doubles finalist, is determined to make his mark in singles this season. Standing in the world No.204’s way of a main-draw place is a 21-year-old Italian. World No.134 Arnaldi, who saved a match point in a three-set victory against Aussie Alex Bolt yesterday, is competing in his first Australian Open and trying to qualify at a Grand Slam for the first time in his career.
Head-to-head record: First meeting